True believers and Golden Palace Casino take note: we have just received news that Our Lord has manifested himself in a four-gig Samsung Flash memory chip - complete with beard and ethereal "flower petal halo" effect. 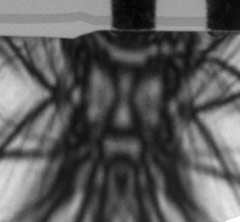 Yay verily, as the Bible sayeth (Luke 21:27): "At that time they will see the Son of Man coming in a cloud with power and great glory." Bendeth thine ears also to the words of Matthew 24:27: "For as the lightning comes from the east and flashes to the west, so will be the coming of the Son of man."

Well, four gigs is plenty of power by anyone's reckoning, and as for "the lightning comes from the east and flashes to the west", that's just too spooky to be coincidence. Time to repent, and no mistake.

For the record, and before we all nip to the pub for one last pint before the final judgement, the Flash Messiah was revealed by Chipworks using transmission electron microscopy. The company's Dick James explained to El Reg: "We often get dark fringe lines in the silicon, and in this case it looks like there was some holy influence." ®

Several hardened atheists here at Vulture Central have suggested this is in fact Gandalf - a heretical suggestion given that Gandalf is a fictional character without the power to manifest himself in silicon. We have, accordingly, emailed their details to the Spanish Inquisition.

Company had hoped deal would grant access to $300m trust account, but shareholders cleared it out
HPC9 Aug 2022 | 1