IBM's highly boffinated research division delivered today when the firm said it would be first to deploy self-assembly microchip nanotechnology on an industrial scale.

The self-assembling material can be coaxed by a scaffold to form vacuum cavities, which improve electrical transmission by reducing transmission between supposedly separate parts of the circuit. Leakage between adjacent wires can release heat into the chip, damping performance, so a vacuum, the ultimate insulator for this "wiring capacitance" should speed things along - IBM says by 35 per cent. 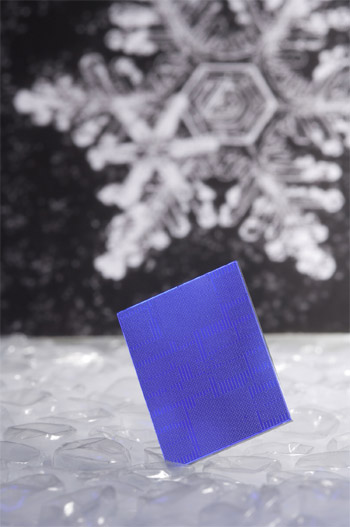 IBM says scientists nicked the idea from nature, where similar processes form sea shells and other crystalline structures. It could mean curtains for lithographic manufacturing techniques, where copper wiring has to be masked with insulating material before lasers etch away. Lithography produces plenty of waste, as unwanted material is discarded after the etching.

IBM said the breakthrough came when its scientists discovered the right mix of polymers to bake onto the circuit wafer, which produced the desired "airgaps" around the copper. The vacuum cavities are just 20 nanometres in diameter, much smaller than the best lithography is capable of today.

IBM trotted out its chief boffin Dan Edelstein, who said: "This is the first time anyone has proven the ability to synthesise mass quantities of these self-assembled polymers and integrate them into an existing manufacturing process with great yield results."

The new process is already integrated into a production line at IBM's East Fishkill, New York, plant and chips will start shipping in servers in 2009. Toshiba and AMD have signed on to licence the technique too.

IBM has a detailed release about the technique here. ®