The strategy may seem counterintuitive until you realize that we're quite literally talking about boxes - those cardboard things that go around the servers. Dell today revealed - a liberal use of the word - project Multipack. This initiative - still liberal - will see Dell pack large numbers of systems in fewer boxes, helping it save on costs and cardboard consumption. 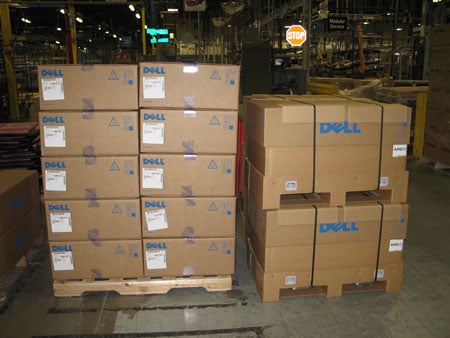 Customers can now receive up to four 1U systems or 10 blades in a single box. Each of the special Multipack boxes has a built-in corrugated pallet, removing the need for a wooden one. In addition, Dell will only send out one set of product manuals and CDs per box under the Multipack agenda.

All told, Dell thinks this plan will result in 2,000 tons of cardboard savings per year. It will also cut back on 1,000 tons of wood pallets, 300 tons of paper, 80 tons of polyethylene and 40 tons of plastic. Before you hit send on that e-mail, these estimates come from Paper Calculator.org.

A less sophisticated publication would first take a shot at Dell's limited research and development budget and then make a joke about how many Dell PhDs it takes to make a bigger box. We're above such puerile humor.

Multipack, in fact, seems beyond practical, and Dell might as well get the pat on the back it deserves for saving some money, while cutting back on waste.

You won't find the Multipack option on Dell's web site.

The reasoning "is that most any customer ordering multiple servers at one time either already has an account lead or could get one, and the packaging would be part of the total solution we are offering the customer," according to a spokesman.

Dell's sales staff have already been training in the way of the big box. ®