Steve Ballmer may have said something interesting; we couldn’t possibly comment...

To criticise Microsoft is, of course, to attack not only an easy target but also a popular one. Many people hate the big M for the simple (and undeniable) reason that it is successful. This is a comfortable reason to hate a company because it guarantees an unending supply of hate figures; if/when the big M falls from grace another one will be along in a moment. But success is an irrational reason for criticism, of course, unlike stupidity which is a perfectly valid one.

Without prior warning, at 3:59PM yesterday afternoon, Microsoft announced that Steve Ballmer’s keynote today was off-limits to journalists: 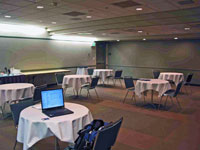 As the deadline for the keynote approached,

the press room heaved with excitement...

Bear in mind that this is completely without precedent. PR dudes normally go around the press room with whips before a keynote. The whole point of inviting journalists to a conference is to have them do the journaling thing. You don’t then ban them.

Imagine, gentle reader, that you are a news vulture at the conference. Awoken from your afternoon slumber by the news, your first thought is that Mr. Ballmer has decided to share a piece of information so tantalizingly choice that it is fit only for the ears of the delegates and not the World. You are a vulture; you catch the pungent whiff of the story of a lifetime. The image of a Pulitzer begins to appear, hovering above your nest … And then you pause for thought.

Is Ballmer really going to share a big secret with (let’s see, 2,600 minus the journos, that’s roughly) 2,590 people? What can it possibly be!!!!????? Something that would rock the share price? Isn’t there a law against that kind of announcement? No, it can’t be that. Is he going to appear on stage in a bath? (Don’t laugh, I’ve seen Don Box do that before now; it isn’t against the law but it should be.) What can this secret thing possibly be?????

Then there are bloggers. Once upon a time journos were privileged in the sense that they were one of the few groups who could share their thoughts/rambling/opinions with the public. One of the huge strengths of the internet is that it has levelled that playing field to within a micron of its life. If there is anything interesting in the presentation then multiple people will blog it and journalists can read blogs. So sharing a secret with 2,590 highly computer literate people is exactly the same as announcing it to the press. Steve knows that, the journalists know that and the attendees know that.

Or, was Microsoft ahead of us on this one? Was it going to have burly security guards ready to wrestle known bloggers to the ground as they tried to enter the hall? Assuming not (shame because that is Pulitzer territory) we were left with intriguing possibility that Microsoft still hadn’t got its corporate brain around blogging. That Microsoft truly thought that banning journalists would contain the announcement to the people within the room.