And all shall have prizes...

Although the New Statesman magazine's annual New Media Awards (NMA) don't quite match up to the EFF's annual Nepotism Award - nothing quite does - they're still a rich source of humour and embarrassment.

Getting an NMA is the equivalent of getting an orange at half time from the coach of your village football team, just for turning up in the rain. But this year, even by its own standards, New Statesman appears to have outsourced the nominations to a team of satirical writers.

What else can explain one nominee, East Devon District Council, which is lauded for "using AJAX web technology" to "provide efficiencies in waste collections".

But Garbage 2.0 faces a tough challenge from another nominee, Jimmy Leach, "head of digital communications" at 10 Downing Street.

"Since he started in his post at Downing Street," we learn, "Jimmy Leach has transformed the government's approach to new media".

That's remarkably similar to the boilerplate text Number 10 sends out to accompany Jimmy Leach's forays into the real world:

"Since he started in his post at Downing Street, Jimmy Leach has transformed the government's approach to new media," apparently.

How? Well, "he executed the e-petitions strategy which has resulted in many millions of people engaging with the website. He has also instituted a series of podcasts featuring the PM and personalities such as Eddie Izzard, Stephen Fry, Chris Evans, Bill Bryson and more".

Your taxes at work, there. 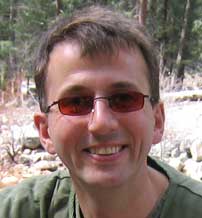 In true New Labour fashion, members of the public are queueing up to offer spontaneous gestures of appreciation.

"It may seem a small thing but as a citizen to have a direct voice into Downing Street has got to be a huge step forward and more listening to the people, not just hearing them, must become an increasingly valuable asset to any premier, now and in the future," gushes one appreciative commenter. "Thank you Jimmy, long may this development continue."

Yes, it's about listening not just hearing. Where would be without the web? Hearing but not listening, probably.

But even that display of party hackery is outdone by Joanne Chew, of the website Local Directgov. Joanne has modestly nominated herself.

"Key to the implementation and deployment of LDG was effective stakeholder communication and management. Multiple channels of communication were employed including e-mail alerts, feedback forms from events, articles in magazines, journals, newsletters, ambient media [ what's that? - ed.], workshops, conference, 'How to guides' posted in website, face-to-face engagement."

Alas, not everyone is appreciative, as you can see from the comments:

"It would be worth investigating not just how much money has been directly spent on this shambles - and for what miniscule benefit - but also how much more has been spent in wasted time across 388 local authorities," writes one commenter. Indeed - much of the work of the LocalGov was famously replicated in a few minutes using Google: check out Directionless Gov.

"Perhaps a reputable magazine with an interest in civic society might care to carry out some enquiries?" asks another.

Alas, that reputable magazine probably won't be the New Statesman, which takes time out from puffing blogs and wikis for some occasional hard-headed policy analysis:

"The world is catching on to smart cards as a way of easing the growing tension between security issues and civil liberties," wrote one Nagemeh Nasiritousi in the supplement to honour the magazine's 2003 New Media Awards. The supplement was sponsored by Schlumberger...the same Schlumberger that's lobbying furiously for the government's highly popular ID card scheme. ®

"Rubbish enabling rubbish"? A cheap shot but I'll take that on the chin. In fact, I don't think that Ajax is rubbish. It *can* be a very useful tool. Probably on the verge of being hugely over-used but in its place, it can be very good if you use it beneficially. By creating this system, we've eradicated operational inefficiencies and increased our contractor's ability to deliver the service to our customers. Yes, I know "customer" is also an over-used buzz-word but here in the unfashionable backwater of district councildom, I do believe in improving services for our customers (or "residents" if your prefer). Probably naive but we all need something to believe in, don't we?

Anyway, I wouldn't have nominated our stuff (who really cares about clinical waste collections in Honiton FFS) but I was completed knocked back by the self-congratulatory back-slapping of the Local Direct Gov self-nomination. That genuine pile of "rubbish enabling nothing" caused a lot of work for negligible return for us. I was going to add a rant to the list but thought instead to put up a small council's piece of work that had real local benefit to serve as a juxtaposition to the excess of the LDG that had no discernible benefit. I thought it might prompt a debate. Instead it's been largely ignored until you wrote about it. So, fair comment (and you *do* flag up the LDG stuff too). But please don't think that we take any of this as any more than "getting an orange at half time from the coach of your village football team". Really, we don't.