Although the unit can operate in standard laptop 'clamshell' mode, a twist and a swivel turns the unit into a tablet, complete with included stylus. There's also a 'nipple' mouse controller, similar to those that used to grace ThinkPads and Toshiba laptops, but here located to be accessible whether the keyboard is hidden or open. Also available from either configuration is a dedicated screen-orientation button that allowed this left-handed user to hold and operate the unit as easily as a right-hander might. 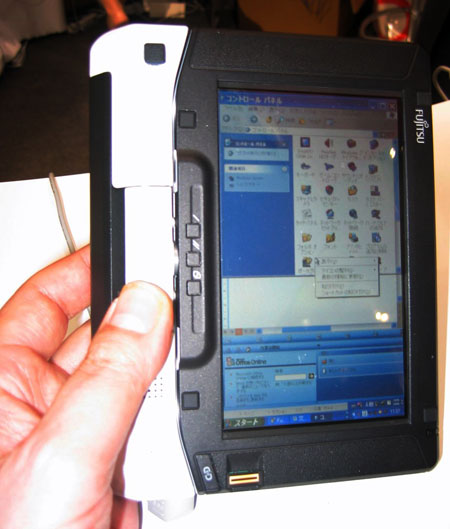 The built-in keyboard, though small - a 14 mm key pitch, according to the publicity, with a fairly generous 1.3mm keystroke travel - proved relatively easy to use, even for my fat foreign fingers, though as with all Japanese keyboards the space bar is too short for my liking, and I kept changing between Japanese and English input. I also disliked the cursor keys needing a modifier Fn key to operate, but keyboards are a matter of personal taste. This is certainly not a keyboard that you'd want to do a lot of work on, but fine for form-filling, etc. In any case, the port replicator contains a few more USB ports, as well as an external VGA display port. The built-in Ethernet - 100-Base-T - also finds its outlet here. 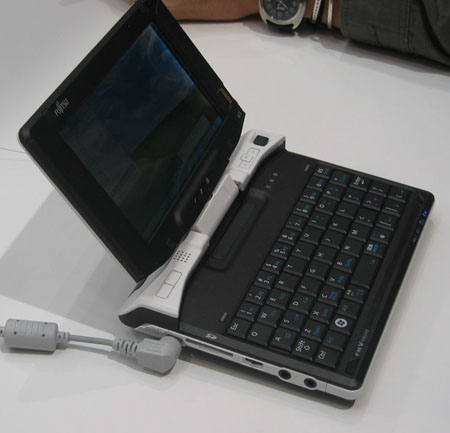 It's the cloud, with go faster stripes