iGasm gets lawyer's knickers in a twist 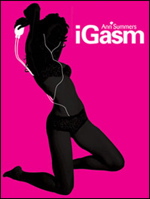 News of the World reports Apple lawyers are flushed over sex shops hawking a £30 iGasm peripheral, which plugs into a music player and vibrates to the beat.

The ads picture the silhouette of a woman on bended knee with familiar white wires leading from ears, to peripheral, to — ah — down there. By the looks of things, she is very pleased with her purchase.

Like a grandmother banging on a bathroom door, demanding to know what you could possibly be doing in there that takes thirty five minutes, Apple is seeking to put a stop to such ribaldry.

Apple has released the cease and desist hounds, but NotW reports the stores aren't bowing to Apple's threats.

Apple has form here: last December it grumbled about iPod-driven sex toy the iBuzz being promoted with a silhouette image not dissimilar to one of its own iPod promos.

Ann Summers boss Jacqueline Gold told the publication: "Perhaps I can send them an iGasm to put a smile back on their faces!" ®

Manufacturers allegedly told to connect to NavIC by 2023, which did not make them happy at all
Personal Tech28 Sep 2022 | 3