Fancy a nuclear power station in your backyard?

Brighton, Bristol, and picturesque Oxfordshire have topped the list of places most suitable to have new nuclear power stations bestowed upon them, replacing existing coal or gas fired power stations. 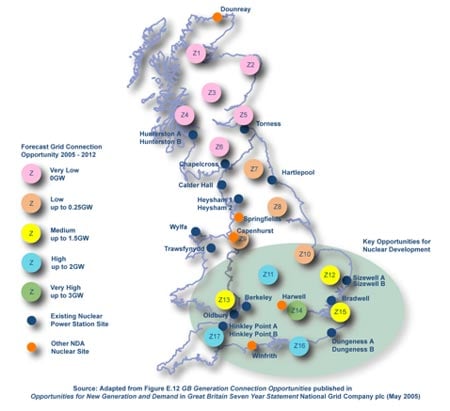 The report was submitted to the government last year. According to The Guardian, Greenpeace made several attempts to force publication using the Freedom of Information Act, but in a response Greenpeace has described as "scandalous", the Department for Trade and Industry (DTI) refused to disclose any details until the publication of its energy white paper.

According to a report from independent nuclear consultants Jackson Consulting, which the DTI was court-ordered to commission, the main factor used in deciding a site's suitability is the ease with which it can be connected up to the National Grid.

Leading the pack is the old military station at Harwell, in Oxfordshire. Next on the list are Sizewell and Hinkley, the only two existing nuclear power stations the report considers suitable, and that are available, for construction of the new twin turbine generators.

So instead, the report suggests redeveloping old conventional power stations. It argues that in cases like these, the construction of a massive cooling tower, for instance, would have less of an aesthetic impact because the existing power station is already part of the landscape.

Greenfield development - that is construction on a totally new, virgin site - has not been ruled out.

The report also says that rising sea levels will have to be taken into account when the stations are built. Most demand, and therefore most construction, will be in the south east - at precisely those locations most at risk from rising seas.

Although most of the sites identified are coastal, the report says building inland should also be possible - such as at the Harwell site.

But the cooling towers that would be needed to make these safe would reduce the efficiency of the stations, add to the cost of construction, and "substantially damage the local amenity value from visual intrusion, causing significant difficulties with local public acceptance".

The DTI said it was still too early to say where the stations should go, and that ultimately the private companies that will build them would propose where they would be sited, The Guardian reports. ®