Why do robot experts build such lousy robots?

We meet the nerds with the world's cleanest floors

In Silicon Valley, any conference calling itself the "Best of the Best" promises more fluff than stuff. But a recent Churchill Club event which promised the cream of the robotics industry confirmed the sceptics' worst fears. Consumer robotics is a business built mostly on play, hope and tinkering - rather than profit or technical accomplishment - to the point that huge, obvious, deal-breaker truths are never even mentioned.

Like the fact that the main appeal of robots, their "autonomy" and "intelligence," are decades away from reality even in the lab.

Or that those vaunted features - if real - would still have negligible economic value, since they can be supplied by any human for next to nothing.

Or that hobbyists aren't likely to succeed where even latter-day Einsteins are flailing.

The conference not only dodged those Big Questions, but tripped up on more basic ones. To start with, what is a "robot"? The most obvious answer - a walking humanoid - was mentioned briefly, to universal disparagement. Upright biped robots are unstable, better for showing off engineering prowess dancing at trade shows (like the eerily naturalistic Honda 'Asimo') than for doing real work, no matter how much the Japanese love them. The second-most-obvious kind of robot - a bolted-down, articulated arm on a factory assembly line - was never mentioned at all, although such robots do a lot of the real work in the real world. And nothing about the various remote-controlled "robot" rovers, driven from a safe distance to explore inhospitable places like Mars or Iraq.

No, at the Churchill Club conference in San Francisco, the only "robots" on offer were an automated vacuum-cleaner, a couple toys, and a GPS-driven car.

A dino friend for Furby

The most gushing cheerleader for robots was one-time performance mime and animator Caleb Chung, inventor of the too-cute Furby toy nine years ago. Furby mostly blinked and cooed - like the deceptively cuddly ye evil creatures from the 1984 movie Gremlins - but that was enough to sell a cool billion dollars' worth of toys, making Furby in dollar terms the most successful consumer "robot" in history. 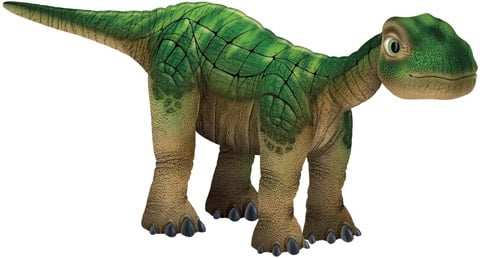 Chung's latest venture is a doe-eyed dinosaur toy called "Pleo" (for Pleistocene - get it?), which coyly bobs its head and shuffles when you stroke it, and gently chews things you put in its mouth, if they are opaque enough for its sensors to notice. Chung's grand goal is for people to form an emotional bond with his robotic companions, and he is most proud of hard-wiring more "organic", less-jerky motion into Pleo's many microprocessors and limbs. This robot is an affectionate, animatronic companion. I guess.

At the head table, Pleo briefly faced off in a mock battle against his antithesis, a proudly robotic Terminator-like construction from the other toy manufacturer, Lego Mindstorms. Pleo, like a character from the kids' animated film The Land Before Time was soft, green, cuddly, quiet and slow; his Mindstorms opponent was an angular, whirring construction of visible gears and girders, metallic gray, attacking jerkily. The Lego Terminator (and a similarly aggressive robo-scorpion) were deliberately mechanical and sharp-edged, because even as toys they appeal to a different demographic: tinkerers.

The Mindstorms system, as described by Lego exec Søren Lund, is not itself a robot, but rather a "toolkit" with which hobbyists can construct their own robots. Lego customers apparently want to assemble the skeleton by hand and see their gears spin, and probably don't have the sophistication to program the more fluid animal motions of Pleo. Plus, they like building weapons more than caressing plastic pseudo-pets.

The Lego system, at about $200 a pop, has been a huge hit with home tinkerers and science-project schoolkids. It has modular beams, gears, pulleys, sensors, wheels, and all the pieces necessary for a dedicated inventor to create, say, a gadget that follows a line of black tape across the floor, reverses direction if it bumps a wall, or scoops up ping-pong balls. Lund mentioned a more extreme construction, which inspects, holds, and actually manipulates a Rubik's Cube puzzle to solve it, here. Mindstorms now even connects to the Microsoft Robotics Studio, so that Windows can crash your (toy) car as well as your computer.

Next page: This robot sucks
Page: