It was Microsoft wot done it

What did happen to that Bloor Report?

Database myths and legends (Part 9) In this series we're looking at the myths and legends of the database world - some are true, some false. The myth under the spotlight today is: Bloor Research once produced a report that slammed SQL Server so much that Microsoft had it suppressed.

OK, let's start at the top. Bloor Research is a highly respectable analyst company. Has it ever looked at scalability in database engines? A quick Google of the words "Bloor Scalability Database" produces over 40,000 hits and simply following a couple of links will convince you that, of course, the company has done so. This kind of report is meat and drink to Bloor.

Now try and find a reference to the highly critical one. I'll give you two clues.

It's hard to find any references to it. In fact, only by knowing, and searching for, the actual title of the report, The Realities of Scalability, was I able to turn up two references to it: here and here.

Both are contemporary news pieces, published shortly after it appeared. It seems very likely that these originally appeared in print and have subsequently migrated to the web as archive material.

So the report clearly did exist, indeed rumour has it that certain copies are still extant... 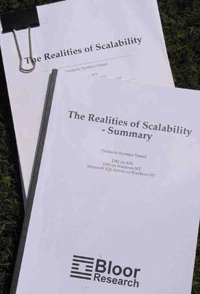 It is still, today, a very impressive body of work. Over 130 detailed pages of complex tests that really put three database engines: DB2 on AIX, DB2 on WindowsNT, and Microsoft SQL Server 6.5 on WindowsNT, through the wringer.

Bloor tested the databases' performance under read-only and update conditions, varied the number of users and the number of processors. Finally, and unusually, Bloor actually performed statistical analysis on the results to verify whether the differences were significant.

It is also undeniable that the report is highly critical of SQL Server 6.5.

The summary says, for example, of the user scalability: "Put simply, Microsoft SQL Server for Windows NT at high numbers of users performs dramatically worse than either of the other two databases."

And of the stability, it says: "This database had a number of failure states that could repeatably be generated. With large numbers of users, it was found that the database would grind to a halt."

DB2 for NT generally acquitted itself well: "Despite the occasional unexplained server or database crash, it proved impossible to consistently generate a fatal error in DB2 for Windows NT. It seemed to be capable of taking most things thrown at it."

And DB2 for AIX was a positive paragon of virtue: "DB2 for AIX proved to be by far the most stable of the platforms tested. No repeatable errors were found, and the system never fell over. The performance never fell appreciably below that which was expected in any of our tests."