It was Microsoft wot done it

What did happen to that Bloor Report?

Was the report suppressed? Yes. The acid test is looking on Bloor's own site. There you'll find an archive that does, indeed, go back to 1997, but there is no record of any database scalability report. 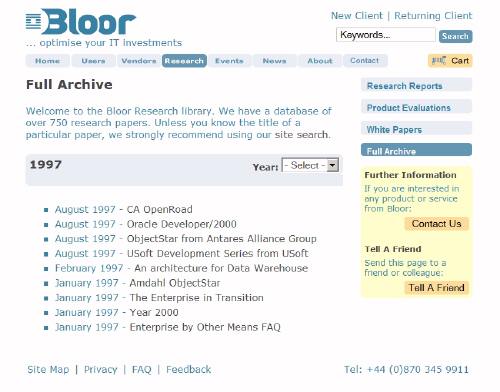 Who was responsible for the suppression? When the report was initially published I was very impressed with the rigour of the testing, so when it suddenly disappeared I approached Bloor to ask where it had gone – whereupon the sorry tale emerged. Microsoft confirmed the basic facts although, as this contemporary column that I wrote in Personal Computer World shows, the stories from the two companies differed in detail.

History ain't what it used to be (allegedly)

Those of you who have been worrying about the implications of the Bloor report on Scalability in Databases can stop worrying: the report essentially no longer exists.

The facts described in the report? Oh, they don't appear to have changed. Bloor did find that Microsoft's SQL Server did not scale well, did find the other points of concern, and the company still stands by those findings. What has changed is that the report itself is no longer an available part of the sum total of human knowledge. If you don't have a copy of it, your chances of obtaining all the information therein are slim indeed.

Here are some more facts, so far as I have been able to ascertain them. The report looked at RDBMSs from two companies, IBM and Microsoft. Bloor claims that both companies (Microsoft included) provided software and support people to set up the RDBMSs for testing; Microsoft disputes this and says it did not supply people to help with the test.

A couple of months after publication of the report, Bloor received a "cease and desist" letter from Microsoft's lawyers. This letter says Bloor is in breach of contract because it failed to obtain the required written permission. Since Bloor had indeed failed to do so, it felt that it had no option but to cease distribution of the report.

A reasonable person might ask why, if Microsoft felt that the report was inaccurate, it didn't try to stop the report being published on those grounds rather than on what appears to be a technicality.

The greatest loss from all of this may not be the actual information contained in the report, but the methods it used for testing databases. Testing databases for speed is a very complex area, too often treated in a trivial way. This Bloor report was, in my opinion, a genuine contribution to our attempts to derive a sensible methodology of testing databases.

As another piece of opinion, I feel that if Microsoft knew the report was inaccurate, it should have attacked on that basis. To attack it on a technicality rather than technical grounds seems to me the worst of all worlds, making the company look high-handed and arrogant.

Of course, I don't want to get any "cease and desist" letters myself, so I want to stress that I am not making any suggestion that Microsoft has behaved in an unreasonable way in this matter. I have every confidence that you can continue to think of Microsoft as one of the family; like, say, a brother – a big brother.

Have I proved the cause and effect – that Microsoft invoked the clause because the report was damning? No, at this point we run out of evidence so it is up to you to draw your own conclusions. I clearly drew mine 10 years ago.

In the hopes of forestalling a "so this proves that Microsoft is a tyrant and that SQL Server is rubbish" response, bear in mind that this is history – it certainly tells us that 10 years ago Microsoft could be heavy handed and that SQL Server 6.5 was a poor product. But companies and products do change.

My belief is that SQL Server is now an excellent product. I would also stick my neck out and guess that Microsoft would probably not act in the same way today. This is not because, as a corporation, it cares particularly about truth and honesty; corporations are not the same as people and have different drivers and objectives. But I do think that Microsoft has learnt that a heavy hand brings bad PR...with, of course, the odd minor hiccough. ®