Sex.com: read it if you dare

A tale of evil from the early days of the internet

Book review OK, I'm going to let you in on some of the secrets of how the internet was built. 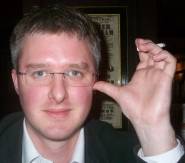 And a cracking read it is. Not since Steve Levy's Hackers have I read a book which gets under the skin of some of the most astonishing characters. And as you read, you get to know them - Stephen Cohen, the man who stole the domain from archetypal Silicon Valley geek, Gary Kremen, and then you come to realise there's actually a third character in this book. And this third character is the really scary one. It's a company called Network Solutions.

Most internet nuts know the basic story. In the earliest days of domains, a bunch of geeks gave each other interesting domain names, and one of them, Gary Kremen, got sex.com and decided to make a sex site. Before he got a chance to do that, the registrar gave it to someone else - specifically, to conman Stephen Cohen.

The document Cohen used to steal the domain was an obvious forgery. Standard terms and conditions at Network Solutions, who administered the registry of domains, clearly stated that before accepting a document of this sort, it had to make obvious checks, including asking the registered owner whether this was indeed from him - and Network Solutions didn't make those checks.

Twelve years went by before the resulting lawsuits came to an end.

The book gets you into the weird, dark world of the adult internet. You find yourself staring into the jaws of the crocodile with Cohen; you discover his amazing ability to bamboozle people - even people who knew exactly what he was up to - by inventing interlinking facts. And on the other side, you meet the drug-crazed Stanford graduate, an obsessive, definitely not a "team player", Gary Kremen.

But every time another brush stroke goes to the portraits of these two, the background stands out more clearly.

Here's the bit where McCarthy pulls the curtain aside and unveils the full backdrop painting: a chapter called "Panzers and Toes" where finally, executives from Network Solutions have to answer questions, and answer them in court.

We're at the stage where we understand that Cohen hacked Network Solutions. He had very little access to its systems, but he did manage to alter the database of who owned sex.com; and then armed with that, changed the name of the owner to his own name. Then, he set about forging documents to show that he'd always owned the domain, and had a trademark on sex.com, and that in fact, he'd been given the domain by the company which Kremen set up and which, he says, Kremen was fired from.

To prove this, Cohen sends a faxed document, "the Dimmick document", one which wouldn't fool a baby. The person who is supposed to have sent it couldn't spell her own name; the letterhead looks like it was made on a John Bull home printing press by an illiterate kindergarten pupil, and there is no background that would stand up to a single phone call to check.

So, we get to February 2000. Up to this point, NetSol has simply refused to dignify any of Kremen's complaints with an answer. It's a dispute between two pornographers, is their official view; not something they have to soil their hands with. Let the two fight it out, they say.