Google: We like the web the way it is

Google extends standards to the industry

“We feel very strongly about this being an industry effort and being a standard. We want this to be the one way that developers can add offline capabilities to their applications,” says Jeff Huger, Google’s VP of engineering, during the keynote for the company’s global Developer Day. 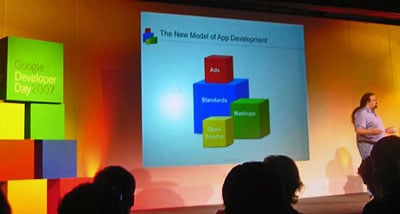 Google Dev Day. Of course there's a box missing from

Google's slide. It's the one that says "Google".

He’s talking about Gears (available, with the other developer’s toys mentioned below, here), a browser plug-in that lets developers extend web applications for offline use. This is Google's answer to the web’s most obvious limitation: when the connection fails, you can no longer do your work. Gear’s solves this with components including the excellent SQLite database engine, also used by PHP 5 and Apple’s Core Data, a local server which caches the pages and scripts used by an application, and a WorkerPool module which enables JavaScript to run in a background thread.

The primary reason for WorkerPool is to support long-running synchronization tasks without locking the user’s web browser. Gears is in beta, works cross-platform on IE and Firefox, and is open source under the BSD license.

First impressions are that this will be useful. Like all the best software, it is conceptually simple. A local database and content cache will be enough in most cases to get an offline web application up and running, though synchronization can be challenging. Apparently there is no set limit to the amount of data applications can store locally. But is this the “one way that developers can add offline capabilities”? Microsoft will no doubt disagree, but Google has smartly enlisted agreement from other potential rivals, including the Adobe, the Mozilla Foundation, and Dojo, all of whom will be supporting the Gears API. It may not be a W3C standard, but this will be widely deployed and hard to resist.

Google Reader is the first Gears-enabled application; it will be interesting to see how it gets applied to other applications like GMail and Docs & Spreadsheets.

What we are seeing is the creation of a new cross-platform runtime based on JavaScript. Is this a rival or a companion to alternatives like Adobe’s Apollo? The answer is that it’s both; but Google’s view, stated in the keynote, is that “we like the web the way it is today, we just want it to work offline.”

Gears is the headline news; but there was more on show at Developer Day. I attended the London event. Google is giving a strong push to its mapping API, now reinforced by Geocode lookup and “Mapplets”, which let you add interactive gadgets to Google Maps. Delegates were also shown the Mashup Editor, which lets you both code and deploy mashup applications online. Like Google Gadgets, these mashup applications are hosted on Google’s servers, increasing their scalability. Google Web Toolkit, which compiles Java to JavaScript, is now at version 1.4 (Release Candidate), with new features including a richer UI library and the ability to download multiple images in a single file.

I asked a number of developers what they thought of the event. Few of those I spoke to had active projects using Google APIs, but many were considering them. There is interest in Gears, though there were concerns about security which Google did not properly address in the sessions. There was some frustration at the shallow nature of many of the sessions, as well as the usual gripes about the poor internet connection available; it was surprising that Google couldn't get that right.

You can follow Tim's visit to Google’s Developer Day on his Blog here.

The new normal is all right for some