No goat sex at the Olympics, rules BBC

The Web 2.0-tastic BBC just loves "user generated content". So when London's Olympic team unveiled its logo for the 2012 games to much mockery earlier today, what could be better than unleashing the Wisdom of the Crowd?

After all, anyone can do better than the official expensive design disaster.

One entry, submitted by "Sean Stayte", won the approval of the BBC sitekeepers and was published as one of the twelve best submissions. In Sean's words:

"Here is my design for the Olympic logo. It is very simple and so memorable. The hands represent Britain pulling together to reveal the Olympics." 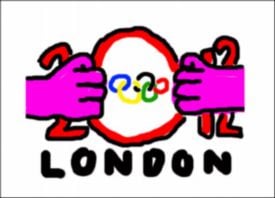 However, it also represents one of the most iconic and notorious shock pictures on the Web, which was originally hosted at goats.cx. Sean's splendid contribution has now been replaced - without comment from the BBC. Sean's original is still hosted here.

Wikipedia, which once again proves that it's the undisputed champ of documenting anal-related web trivia, wasted no time in updating this important page,and has a screen grab here. Get there before some joker replaces it with the real goats.cx picture.

Sean's contribution made it to TV too, click the grab for the YouTube proof. While the creator's B3ta page is here.