Forgotten Tech There's nothing new under the sun, some folk say, and that's certainly true of Palm's recently announced Foleo. It's the palmtop reborn in a slightly sexier, slightly larger form. Even its name is reminiscent of that bygone arena - it's rather like the Atari Portfolio, the world's first palmtop PC, released in June 1989. 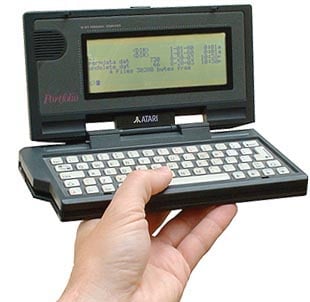 Atari's compact clamshell ran an MS-DOS compatible operating system - DIP-DOS, from Guildford-based Distributed Information Processing (DIP) Systems - on a 4.92MHz Intel 80C88 processor. The Portfolio has 128KB of memory on board, 32KB of which was reserved for data storage, exposed as the C: drive and backed up by the three AA batteries the Portfolio ran from. A built-in long-life cell protected the memory when the batteries needed changing.

The Portfolio's display was a 40-character by eight-line job with a 240 x 64-pixel graphics mode, mounted next to the unit's speaker and above the calculator-style QWERTY keypad. A slot on the side took a range of device-specific memory cards running from 32KB to 128KB.

Anticipating Palm's own Pilot - which shipped in April 1996, seven years after Atari first showed its palmtop - the Portfolio had diary and address book applications, along with a basic word processor and a spreadsheet package. The apps and the OS resided in 256KB of ROM. Plenty of space, you might think, for programming tools, but the Portfolio had none, not even a Basic language interpreter. To be fair, this wasn't a machine aimed at coders but at the growing number of folk who wanted a computer for information storage and retrieval, a feature Palm was later to major on with the Pilot. In any case, programming tools were later offered as add-ons. 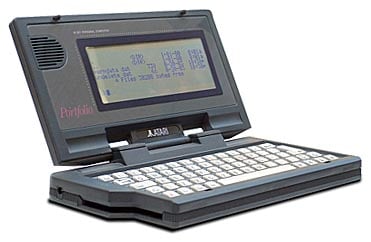 Unlike the Pilot and, now, the Foleo, the Portfolio was designed to operate on its own, independently of a desktop machine or other device. That said, data could be transferred back and forth between the palmtop and a desktop, via a cable connected to the Portfolio's add-on parallel port.

Incidentally, movie buffs may recall an Atari Portfolio was the device the young John Connor used to hack an ATM in Terminator 2.