Tie your own Office ribbon

TechEd Visual Studio 2008 (codename Orcas, available now as beta 1 and shipping sometime before the end of 2007) will come with Visual Studio Tools for Office 3.0, which finally adds a ribbon designer so you can easily integrate your Office add-ons with the new-look interface.

You can also add Windows Forms and WPF controls to Outlook forms, pulling in context-sensitive information from backend sources like SQL Server, Excel Services, or SharePoint that can be automatically added as a new area or a whole new tab on incoming email or in a contact card.

Microsoft group product manager Brian Goldfarb demonstrated the new version during the TechEd keynote this week, emphasising how little code you need to write (although VSTO has full IntelliSense for Office components); one line of code to load the add-in only for email from users in say, the sales team, one line of code to initialise a control or load SharePoint. The rest is visual design; dragging controls, buttons and ribbons, and setting properties. VSTO 3 also has a wizard-based workflow designer for SharePoint. 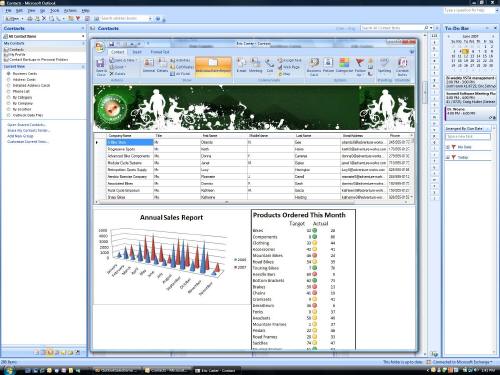 Previously, customising the ribbon meant writing the XML by hand; now you can pick which ribbon to extend, add a new group inside the ribbon, add a new tab to the Outlook contact, drag and drop button controls, and add your own images, all from the ribbon designer. Goldfarb showed adding a chart to email messages from anyone in the sales team. This showed a sales scorecard using a WPF control built in Expression together with figures from SQL Server to give an instant view of how much they've sold recently. He also added a sales report tab to the standard Outlook Contact form. This used a scorecard control to embed a grid from SQL Server, along with reports and charts from Excel Services and information from SharePoint.

VSTO isn't limited to pulling information from Microsoft servers; you could access data from Line of Business applications or add maps and note fields to existing Outlook forms. According to Goldfarb: "Office business applications are great for providing data to your users in a contextualised way." And Office developers will find VSTO 3 a far easier way to customise and extend Excel. ®