The convergence between videogaming and real-world warfare (at least, war as seen from a Western perspective) continues to advance.

The US Army has been a leader in efforts to make use of gaming memes. This has been in pursuit of recruits from the post-Nintendo generations as much as anything, but the military also seeks operational benefits.

Previous examples of this philosophy have been military involvement in creating Full Spectrum Warrior - supposedly as a training aid - and latterly America's Army "the official US Army game", which features "Real Heroes...some of the exceptional Soldiers who are at the forefront in the defense of freedom." Action figures will soon be available.

Apart from using games to recruit or train young men* for the warzones of Southwest Asia, the US military establishment has also been using games to reintegrate them into society when they come back psychologically injured. An expansion pack for Full Spectrum Warrior called Virtual Iraq is favoured, apparently.

Then there has been the use of gaming-type protocols to build massively multiplayer battle sims for training purposes. The RAF is in on this, and there are also Command-&-Conquer-style games for commanders and staff moguls moving counters on a map, as opposed to pilots and riflemen in the thick of the action (in this case, however, the game typically revolves around oil rather than tiberium). 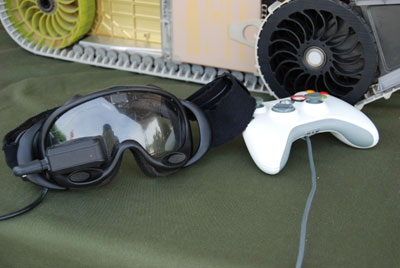 Examples include the US Full Spectrum Command and Marine Air-Ground Task Force XXI. Again the UK is involved, plugging into US military MMOs via the "Coalition Warrior Interoperability Demonstrator" using "real military role players, from across the front line commands."

And now the push is on to take gaming right onto the battlefield, with the iRobot range of US Army SUGV combat robots employing a suspiciously familiar human-interface device (see pic).

There's no word yet on making "Game Over" a bit less final, however. ®

*And no doubt a vanishingly small number of young women