Can't wait for British-badged ones 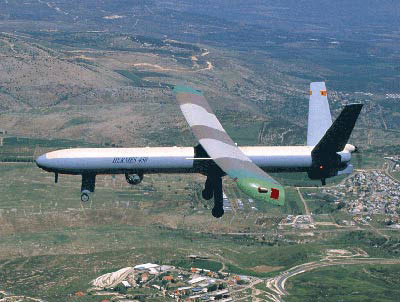 The Hermes 450 is a large, capable 450 kg spy drone manufactured by Elbit Systems of Israel. Able to stay airborne for a maximum of 20 hours, it has a 10.5 metre wingspan and is 6.1 metres long. It can carry a variety of different surveillance packages, including the CoMPASS (Compact Multi-Purpose Advanced Stabilised System), which is a combined laser marker and infrared scanner.

Elbit also offer Hermes with the AN/ZPQ-1 TESAR (Tactical Endurance Synthetic Aperture Radar) from Northrop Grumman of the US, a ground-sweeping radar which can detect objects as small as one foot in size and pick out those which are moving from those which aren't. Radars of this type are essential for full bad weather capability, and help a lot with scanning large areas of terrain. Electro-optical scanners such as CoMPASS tend to offer a "drink-straw" view of only small areas in detail. The TESAR is the same radar used in the hugely successful "Predator" drone, in service for several years now with the US forces.

The MoD has a long-running plan to duplicate at least some of the Israeli drone-manufacturing industrial base in the UK, under the British Army's "Watchkeeper" plan. This has seen the establishment of joint-venture companies in the UK co-owned by Elbit and Thales UK, the French-owned part of the onshore British defence industry. Thales is lead contractor for Watchkeeper. The idea is that ultimately Watchkeeper will see the creation of 2,100 "high-quality" industrial jobs in Britain, as Brits learn to make and support Watchkeeper-branded Hermes-450 drones.

Watchkeeper workshare outside Israel is also being boosted by the substitution of Thales' new "I-MASTER" ground-scan radars instead of the proven American TESAR. Thales says "I-MASTER builds upon Thales' radar expertise that exists in depth in both the UK and France."

Various other UK/European solutions will be integrated into Watchkeeper, replacing the Israeli choices. This will include datalinks, network integration, ground support vehicles, training, and certification.

Based on previous experience of the UK buying foreign platforms and fiddling with them in order to channel MoD pork to UK companies, the Watchkeeper programme can be expected to take some time and cost a lot more than just buying Hermes drones off the shelf from Israel. Though there may be some increase in performance and spec, as occurred with the UK assembly of Apache gunships, it's unlikely to justify the price increase (the Apaches more than tripled in cost as a result of being assembled in the UK, and even their biggest fans concede that they aren't three times as good).

Looking at the omens, UK taxpayers and troops can expect lamentable value for money and long delays from Watchkeeper. A £700m contract was announced in 2005, and the MoD expects to spend £100m more on "government furnished equipment and infrastructure".

Just how many Watchkeepers the taxpayers get for that sum is being kept under wraps. "The platform numbers will not be released for operational reasons," says the MoD. The rebadged, europeanised drones aren't expected in service until 2010 - a date which has already slipped several times.

By way of comparison, the US forces currently expect to pay no more than £8m per bird for MQ-9 "Reaper"/Predator-B aircraft, with full spares and ground equipment. The RAF also expects to field a number of such aircraft this year, and already operates them jointly with the US. The Reaper is much bigger and more capable than Watchkeeper will be: it has Lynx moving-target radar with 10cm resolution and can carry 14 Hellfire missiles itself, rather than merely pointing out targets for others.

If the UK gets 100 Watchkeepers for its £800m, they will have cost the same as hugely more capable Reapers and arrived much later. It wouldn't be surprising if, in fact, a smaller number were delivered.

In any case, going back to current events, it would appear the British Army can't wait until 2010 or whenever for its Watchkeepers. An unspecified number of unambiguously Israeli Hermes-450s will be bought off the shelf for US$110m, it was announced last week (pdf).

This pressing need isn't at all surprising, with the UK MoD revealing last month that it has lost or wrecked more than 70 drones in Iraq alone just since 2003.

A high proportion of these are believed to have been the ill-fated British Phoenix, a machine with a terrible reputation. A significant number of Phoenixes are believed to have been previously lost or smashed up in Kosovo, too, and others have been cannibalised for spares. As less than 200 were delivered, it seems likely that 32 Regiment (the Army's drone-operations unit) could run out of things to fly well in advance of the possible 2010 arrival of Watchkeeper.

Hence last week's hasty import from Israel. Just what Watchkeeper will eventually offer that the new Hermes 450s don't already do isn't at all clear, with Thales and Elbit understandably declining to comment and the MoD contact unreachable as of going to press. Thales suggested that the Hermes 450 for the UK was "single payload," hinting that it may not have a scanning radar, but refused to confirm this. The Elbit website says the 450 airframe is "multi payload," however.

Interestingly, 32 Regiment's website says the Hermes 450 will be "operational from mid-2007" and "it will greatly enhance our ISTAR capabilities." This might refer merely to target designation - an ability the Phoenix is said to lack - but it could equally well refer to a radar moving-target indicator. There's a pic of British soldiers training to use Hermes 450s somewhere hot and sandy - perhaps Israel.®

But... but British Gas customers are making cost savings, though