DARPA*, the occasionally eccentric American death-tech hothouse, has come up with a scheme to develop "LANdroids", small crawling radio-relay robots the size of a deck of cards.

The idea is that the diminutive, cheap, expendable droids would be scattered about by US troops on foot. They would then link up to form a wireless voice/data network which could penetrate into every corner of tricky urban non-line-of-sight environments.

The net would use multiple pathways for resilience, and would be able to heal itself in the event of individual droids going down. 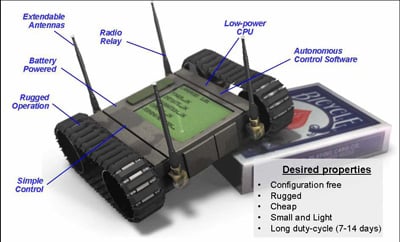 DARPA conception of a notional LANdroid.

At present, radio comms tend to be unreliable for foot soldiers in urban warfare, especially indoors. But in the future, troops storming a building, underground bunker complex, or caves might drop LANdroids as they went, providing an instant Wi-Fi network. They might do this prompted by falling signal strength as they advanced.

DARPA says: "The LANdroid robots, which will consist of a radio, robotic platform, battery, and small processor, will be expendable. Dismounted warfighters must be able to drop and go – benefiting from the infrastructure while it is in place but not being required to move back into harm's way to retrieve the robots...the target is to demonstrate a platform that would have a final production cost of $100 per LANdroid at modest volumes (e.g., 1,000 units)."

The mobile access points must be able to move across "typical indoor urban environments (e.g., concrete, asphalt, carpet)" at half a metre a second or better - a slow crawl. "Stair climbing capabilities are not required as warfighters will often provide the coarsegrained movement - though novel ideas are welcome," DARPA says.

This limited degree of movement will allow the droid network to adjust itself for the best possible signal propagation. As DARPA notes, movement of just half a wavelength is often very significant for this purpose. Short moves by LANdroids could also open up lines of sight or cope with such events as vehicles moving about.

More ambitiously, a LANdroid net is expected to "self-heal", shifting its members to eliminate blackspots caused by a LANdroid going offline. At 0.5m/s, this might not happen like lightning, certainly not in nets covering more than one building floor; but then, if you don't ask you don't get.

DARPA also admits that "it is expected that power will be a challenging design requirement". LANdroid designers are expected to squeeze out maximum life from light, cheap, throwaway batteries by smart use of juice. The tiny radiobots will need to weigh up the power costs of moving a node to achieve better reception against that of staying put and transmitting at higher power, for instance.

This will be all the more difficult as LANdroids are unlikely to have a very precise notion of their own location, being expected to operate indoors - out of satnav coverage. Other than signal strength, all the little robots will have to go on is "a basic set of sensors (e.g., bump, drop, direction, movement)...as compliant with the cost and dimensional constraints of the platform as possible".

All in all, a tough challenge for a device that can't be heavier than 1kg or bigger than a litre in volume. The more so as it has to come in at low-end mobile phone prices for a batch of just a thousand, while doing all that a high-spec phone does and a whole lot more.

Still, even the faddiest, most revenue-intensive handset customers don't just gaily fling their phones about by the satchelful whenever they go to work. And make no mistake, the US military is very willing to spend money on small, one-shot tech packages which will be expended like ammunition (literally: there are plans to produce GPS/inertial screw-on guidance kits for ordinary artillery shells, which would turn them into mini-smartbombs, for instance).

LANdroids may not actually win any wars for America on their own, even if they work, but there could well be money to be made producing them.