RoTM The EU has moved to restrict the number of mobility scooters available to a machine uprising on the UK streets by slapping import duty on the vehicles, the Telegraph reports. 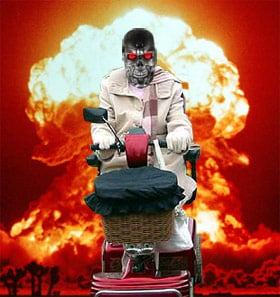 The ruling means a £250 price hike on the average £2.5k cost of the mostly Taiwanese and Chinese vehicles, which are "exempt from VAT for disabled purchasers and until recently, were also free of customs duty". Whereas the mobility scooter was previously classified as "a carriage for disabled persons" , they were now banded with "motor vehicles for the transport of persons", attracting a 10 per cent customs mark-up.

Ray Hodgkinson, director general of the British Healthcare Trades Association (BHTA), has "warned that the decision to treat the vehicles as 'go-karts' could bankrupt some companies". He added that HM Revenue and Customs' move "was apparently inspired by fears that they were also being used as golf buggies even though they were unsuitable for that use".

Hodgkinson also claimed that HMRC was pursuing importers for three years' back duty, and called for Gordon Brown to "take up the cudgels with the EU" over the outrage.

HMRC declared the reclassification "the responsibility of the European Community, based on the World Customs Organisation’s coding system". It said in a statement: "HMRC are advising the UK industry on how best to pursue a change to the customs classification."

While the announcement is indeed bad news for genuine mobility scooter users, including 91-year-old John Cooper who sports a hip replacement and was recently upgraded with a pacemaker, and who dubbed the plan "disgraceful", there is a suspicion that British intelligence services may have identified a potential threat to human hegemony over Planet Earth and have sought to contain the menace.

Indeed, neoLuddite Resistance Army (NRA) field reports suggest an alarming increase in motorised grannies charging around town centres with little regard for human life or their own safety. Were they ever to form an alliance with cranially-chip-implanted, Segway-borne Google drones, the consequences for mankind could be catastrophic. ®