Those of you with a need for speed may be interested in this eBay auction which is offering "for the price of a sports motorcycle" a jet-powered go-kart guaranteed to attract all the right kind of attention: 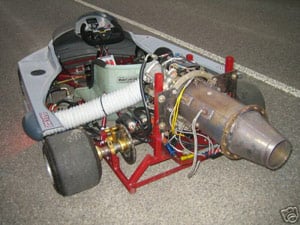 This kart is the result of several thousands of pounds and many, many man hours of work and was designed, constructed and operated by a qualified aircraft engineer.

Fitted with a MILITARY spec JFS-100 jet engine normally used as a jet fuel starter for the US Navy A7 corsair carrier aircraft.

Additionally, and possibly uniquely, it is fitted with a superb AFTERBURNER unit creating extra thrust, noise and spectacular fire and smoke effects. Perfect for shows! Push one button to inject fuel, then push the other to ignite!

Excellent instrumentation fitted including EGT gauge to monitor engine running and a digital % RPM gauge too.

The kart sits very,very low and handles like it's on rails, totally rocksteady at speed.

Everywhere this kart goes it draws large crowds and could be a show winner or suitable for sponsorship.

Top speed is unknown, and I have no figures for 0-60 or quarter mile speeds.

And so on. What worries us slightly is that last sentence, coupled with the fact that none of the snaps show the beast fired up. We're not saying it doesn't work, rather that it quite likely works rather too well. Mind you, the idea of giving a speed camera the finger while doing Mach 0.6 round the M25 is rather appealing... ®

Thanks to Foxdie for the high-speed tip-off.