Fuelled by a seemingly inexhaustible stream of federal military/security research cash, the US flying-robot industry seems to produce fresh wonders every day.

Today's robot-related news reveals yet another new twist: the US Army Space and Missile Defense Command has put $6.2m into the "Orion" High Altitude, Long Loiter (HALL) aircraft. The Orion's special sauce is its hydrogen-powered engine, which gives it the ability to operate at 65,000 feet - some 12 miles up - and stay there for better than four days. 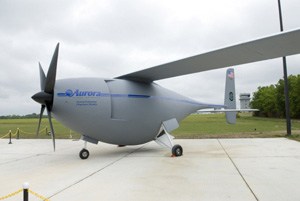 According to Flight International, the engine itself is no more than a supercharged Ford car engine modified to burn hydrogen. Presumably, the problems of cryogenic liquid hydrogen boiling off and escaping from the tank are somewhat eased up in the sub-zero heights of the stratosphere.

Orion can only carry about 180kg of payload, however, so it could struggle as an eye in the sky. The US Army are probably more interested in using it intially as a relay for line-of-sight comms links.

But the American soldiery are also interested in long-endurance, super-high-flying air platforms which could lurk far above overseas battlefields and perhaps sniff out incoming enemy cruise missiles or other threats which would be below the horizon. They have plans* to deploy Orion-type robot HALL planes in concert with the American droid airships which are under development.

You didn't know about the robo-airships? They're being built by the Missile Defence Agency (not the same as Army Space & Missile Defence) and - of course - the Pentagon mad scientists (pdf) at DARPA. The DARPA ship will be especially amazing, if it works - able to sit in the sky without refuelling for over a year, and track individual people walking about on the ground from 300km away.

The comparatively dull winged, hydrogen-fuelled Orion is being developed by Aurora Flight Sciences in cooperation with Boeing's "Phantom Works," and there is also a plan for the two companies to build a bigger twin-engined job which could stay at 65,000 feet for 10 days. ®

*The relevant Army pdf factsheet seems to be unavailable as of writing, but you can check the Google html cache here. It's a bit rich in staff-college acronyms.

Don’t panic, but five jet drones just used their AI to chat and collaborate while in flight

Not going anywhere, just not going to space. A bit like the calamity capsule

'Fragile and ageing legacy systems' need to be replaced – now