US defence contractors have carried out the first flight tests in which America's latest cutting-edge fighter targeting radars have been put to novel use - as high-capacity wireless datalinks. This crafty use of existing hardware has the potential to ease military bandwidth bottlenecks, and could offer a chance for expensive superfighters to be of use even in the absence of serious aerial opposition. 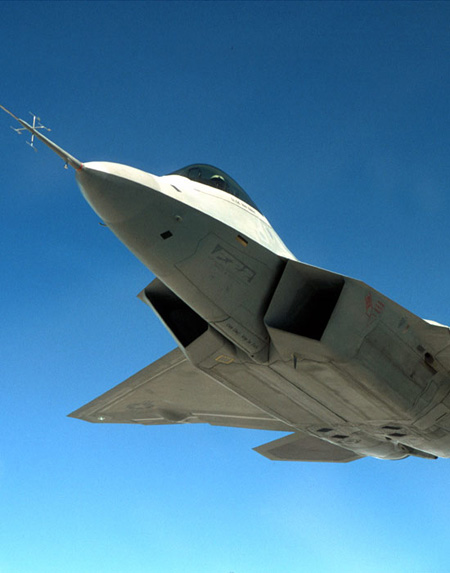 The most expensive Wi-Fi hotspot in the world?

The latest generation of US military aircraft carry so-called Active Electronically Scanned Array* (AESA) radars, which are made up of many separate transmit-receive elements. AESA radars have long been heralded as miraculous multi-tasking kit, capable of acting as electronic-warfare scanners, jammers, or even electromagnetic weapons capable of frying enemy circuitry from afar.

There have also been ground trials in which the radar from America's ultra-advanced, hyper-expensive F-22 "Raptor" stealth superfighter has been used as a kind of Wi-Fi card on steroids, able to transmit data at a blistering 548 Mbit/sec and receive it at Gigabit speed.

This is important, because at present most US and allied aircraft have to exchange information using a system called Link 16, which tops out at a shade over 1 Mbit/sec. That's quite adequate for reporting positions and speeds of enemy planes, but it's terrible for passing big modern data streams.

A modern drone aircraft needs to send several Mbit/sec of bandwidth back to its masters in order to operate effectively, for instance. The latest flying robots can pilot themselves, but they still need to send video and synthetic radar imagery back so targeting decisions can be taken and intelligence acted on.

At the moment, drone bandwidth often has to be provided using scarce satellite capacity. Watchkeeper surveillance drones due in UK service from 2010 may need to be sent up in pairs, so that one can relay data from the other over a dedicated line-of-sight datalink. Meanwhile, in typical modern conflicts, vastly expensive superfighters like the Raptor have tended to scrabble for employment - enemy superfighters being scarce.

But now an alliance of Northrop Grumman, Lockheed Martin, and L-3 Communications has duplicated the AESA ground tests in the air, using a Raptor radar mounted in a BAC 1-11 test plane to exchange data with a ground station at 274 Mbit/sec, "fully duplex". AESA radars are well able to handle two simultaneous information streams, apparently. All you need is an "off-the-shelf, L-3 programmable modem".

"This will allow pilots to relay important combat information to the global information grid (GIG) in seconds."

Of course, that information might come from the Raptor's own sensors, or from other manned aircraft. Most commentators have seen the AESA datalink as being a tool for high-tech air battle with the Raptor fully engaged, and they could well be right. But the mighty nine-figure superjet with its human pilot is scarcely the first choice in a counter-insurgency war. A relatively unobtrusive, self-piloting combat drone such as the Warrior, costing about one per cent what a Raptor does, would normally be more likely to head into harm's way.

Tomorrow's fighter pilot could well find himself effectively driving an airborne Wi-Fi access point for the robot warriors of the future. It might not just be Raptors - other US jets have AESA radars too.

We went with the Wi-Fi comparison rather than 3G as it's closer to 274 Mbit/sec.