Perhaps your real life is so rich you don't have time for another.

Even so, the US Department of Defense (DOD) may already be creating a copy of you in an alternate reality to see how long you can go without food or water, or how you will respond to televised propaganda.

The DOD is developing a parallel to Planet Earth, with billions of individual "nodes" to reflect every man, woman, and child this side of the dividing line between reality and AR.

Called the Sentient World Simulation (SWS), it will be a "synthetic mirror of the real world with automated continuous calibration with respect to current real-world information", according to a concept paper for the project.

"SWS provides an environment for testing Psychological Operations (PSYOP)," the paper reads, so that military leaders can "develop and test multiple courses of action to anticipate and shape behaviors of adversaries, neutrals, and partners".

SWS also replicates financial institutions, utilities, media outlets, and street corner shops. By applying theories of economics and human psychology, its developers believe they can predict how individuals and mobs will respond to various stressors. 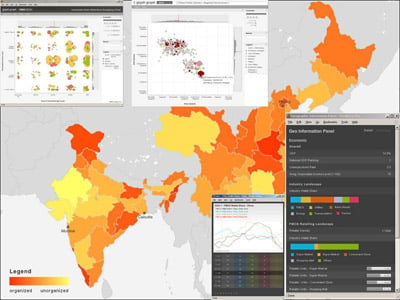 Yank a country's water supply. Stage a military coup. SWS will tell you what happens next.

"The idea is to generate alternative futures with outcomes based on interactions between multiple sides," said Purdue University professor Alok Chaturvedi, co-author of the SWS concept paper.

SEAS users can visualise the nodes and scenarios in text boxes and graphs, or as icons set against geographical maps.

Corporations can use SEAS to test the market for new products, said Chaturvedi. Simulex lists the pharmaceutical giant Eli Lilly and defense contractor Lockheed Martin among its private sector clients.

The US government appears to be Simulex's number one customer, however. And Chaturvedi has received millions of dollars in grants from the military and the National Science Foundation to develop SEAS.

Chaturvedi is now pitching SWS to DARPA and discussing it with officials at the US Department of Homeland Security, where he said the idea has been well received, despite the thorny privacy issues for US citizens.

Slack said to be worth fraction of price paid, new hires not as productive amid downturn
SaaS30 Jan 2023 | 2

Did Pathfinder get lost in Intel's sea of red ink? Or is Chipzilla becoming RISC averse?
Software30 Jan 2023 | 10

But the first rule of Chip Fight Club must be observed. Meanwhile Beijing may have its own shadow bans
Systems30 Jan 2023 | 12