In the blogosphere, everyone can hear you squeal for cash

The Register has been appalled by Microsoft paying bloggers to write advertorial for its latest hype campaign. The reason? We thought of it first, dammit.

In the past few days, John Battelle's (pictured) Federated Media blog advertising network has been bombarded by criticism after it got its name brand tech watchers Om Malik and Michael Arrington* to thump the tub on behalf of Redmond's "people ready" marketing wheeze. They agreed to provide canned quotes explaining what "people ready" means, such as "without people, there are no ideas", which we can all get on board with.

Federated's sponsorship boutique built a lovely bespoke website on Microsoft's behalf to contain the quotes and disseminate the idea, which was thought of by a person. 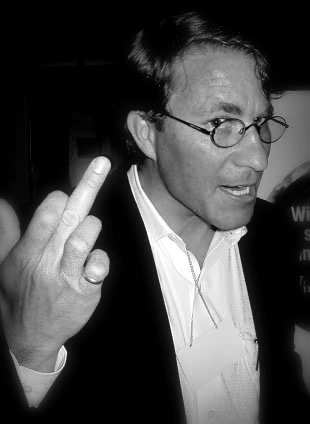 Gawker boss Nick Denton led the whiney cries of foul on Valleywag. In a post entitled "Buying their voices", Jeff Jarvis, another blogger who Federated Media handles commercial ventures for, couldn't get his old-fashioned head around this exciting new paradigm in three-way digital conversations between writers, readers, and gigantic, pervasive, global technology omnicorps.

Except it's not new. Long-time readers will remember that The Register pioneered this brave new world of "conversational" marketing in a policy we announced in 2001 under the heading "We'll do anything for money". For example, here's our Diamond Service, which in dotcom fallout days costs a bargain £5,000 per month:

For the big swinging dicks of the IT world there is only one choice - Diamond Service. Additional benefits of the Diamond card include:

A service years ahead of its time - which is Now - we're sure you'll agree.®

*Malik has decided he's not people ready anymore. Arrington is defiant, "fighting alone in a sea of controversy". That martyr complex is coming along nicely, Michael.

Integrity - we've heard of it

Prospective commenters who want to avoid sounding like a confused Frenchman are politely invited to avail themselves of this - a second handy Reg policy guide, before proceeding.