Secrets of the Sony we never had

We’re not particularly techie as people, we’re not chasing the next technology bus. But we think we’re useful because we see things through the eyes of your average consumer, not a techie. Most clients are techies too.

With the Series 5, we simply looked at the Series 3 and focused on anywhere we could do things better. The keyboard was the most obvious.

When we first created a keyboard that size, people said, “you can’t use that, it’s too small!” But people thought they’d be sitting at a desk. There’s really two modes of using it. In one, you hold on to it and do what we call “squirrel” — type with your thumbs. Or you sit down and you touch type. A successful device does both of those.

We quickly realised that by angling the keyboard towards you, you don’t need a display that changes, that moves to or away from you, because you already know where your hands are. It’s just a matter of getting rid of the glare. Unfortunately, once you had a touch screen, you had more glare than the fantastic Series 3 screen, which had great anti-glare. With a pen the only complication was that it didn’t tip backwards.

The size of the device was quite straightforward. With the Series 3 we started with a tiny screen — that was dictated by cost. We knew there were two solid state discs, and a speaker in the middle. With the Series 5, it was probably the speaker, the two AA batteries, and the serial connector. Those were relatively known factors.

It eventually got to be slightly bigger than the Series 3 which was annoying. It was a millimetre bigger. But we made use of every little millimetre of that space. 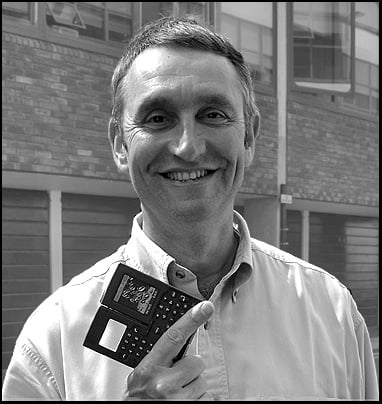 I think the problem was they abandoned the original EPOC, EPOC1 [renamed SIBO after 1997]

That was very innovative, very easy to use, and then they basically started on the Series 5 software which was much more grown up. It was about putting a laptop in your pocket, which was fine for a small niche, but not what a lot of people wanted. They were following a technology trend, leaving behind a really fantastic operating system that fizzled out and died. It could still be relevant today. That’s what’s so sad.

There were a number of things in the Series 5 to show we can multitask with these fast new keys. Windows CE was coming out and the Series 5 had to become a CE-buster. I don’t know why keys such as the diamond, Psion’s own invention, were dropped. Whether the new keys were actually used by anything was another matter. And in the Series 3, you can start typing in the address book and it would just find the person matching the string.

Connectivity had always been a problem. That’s where Palm came through, they said “connectivity is king”. You’re basically saying the data lives on the computer, you can sync the device with the computer

You sync the device with a computer and you can take it out and fiddle around with it — it’s a very different way to look at it. Psion was saying the data is in the handheld — you can back it up if you want.

We wanted to combine a popular area of the Psion — database and diary and the ability to write text, but not neccessarily communicate it at the time — into a nice simple small form factor. It was a phone plus the ability to do Psion things.

“It wasn’t Psion’s mentality at all to see what competitors were doing.”

Three times we nearly sold it — to Philips, Siemens and T-Mobile. Every senior person we showed it to loved it — but you try and make it work in a company like that. Some people wanted to make it an IM device, some wanted some great panoramic 3D thing — everything except a simple pocket address book in your phone.

We got a 150,000 first order pledge from T-Mobile, after nine months we went to sign it and that very day they turned round and said our allegiance is with Microsoft — and from now on all T-Mobile products would be based on Microsoft software. That was in 2004.

If you ever find an interested party, let us know.

So many Psions we never saw

There were so many project that never saw the light of day.

We did a whole bunch of things with phones in them. There were projects to do screen only devices — a number of aborted screen-only projects. Before Odin, we did a skunkworks project — Ace — which had a screen on the front. It was never shown to anyone. It was around the time Harold Goddijn [today TomTom CEO, and Psion Computer MD after the Symbian split] joined. It really was “Help, Palm are doing this!”

That was unusual — it wasn’t Psion’s mentality at all to see what competitors were doing. So we had a skunkworks projects with Ken [McAlpine] to see how we could put that [?] into a smaller case.

We did Hero, a hybrid with a display on the outside. There was an LCD and buttons that allowed you to make calls and preview texts without opening the case. It was going after the Communicator market. There was eventually a Revo and a phone module, reducing it in size further. We had to get around Nokia patents for displays and key interfaces on the outside — a Communicator had that and we had to steer away from their design.

There was a Series 5 keyboard in a Series 3 form factor — basically a low cost device — with retracting legs so it could stand up. It had no hinge, which made it stronger. We did the first Windows CE embedded GSM device — it was a joint Psion-Siemens venture. You’ll have to remember that Psion wasn’t religious about EPOC — it didn’t have a choice. All the software people had just moved to Symbian. That project didn’t work out either.

Then there were versions of the Series 5. It had been designed so that the back could be removable — there was a quite deliberate decision to put the PCB [printed circuit board] on the outside. So we came up with a version with a PC card that could house a PC card modem. There was talk about doing a GSM module as well. It was possible to do all that in the platform, but it never happened.

We did one with a standard Fujitsu keyboard and went through agony with Microsoft over it.

There were several more Revos. The Bluetooth Revo was ready, but never saw the light of day. They were more bulbous and had a big curve on the front to hide the Bluetooth board.

But the Revo battery was unreliable. It was embedded, but not li-ion [two AAA rechargables] so it didn’t hold charge very well. The Series 3 was fantastic because it had a lot of latent energy in the backup battery — everything seemed to last for months if you didn’t use it. The S5 backup battery is a bit dodgy — the backup only lastes a week. But as soon as you use a rechargeable it’s an iffy proposition. Data integrity was always seen as really, really important at Psion.

Psion was always wanting to be one step ahead. With Pogo and TomTom, the pioneering spirit is there. They were and are looking at the mass market.

David Potter was never very happy to do that. Psion were very cautious with numbers — they didn’t take the opportunity to do bigger volume products. Now you can say Palm, who were a very commercial venture, overproduced by three million one year [2001], and Psion would say, “well we’re still here — what a good thing we didn’t either”.

Therefore we’ve become a broader church — with greater cross sectors. It’s all about keeping it simple. Technology unfortunately makes things more complicated. When a company returns with a new version of its product, it says: “All those problems in the last model, well, we’ll forget about them because we want these new features in”. We say, “forget all about those new features”.

For us, Psion brought us a lot of opportunities. Half our business today must have a connection with Psion.

Therefore Ltd is a successful design company with clients including Oki, Toshiba, Fujitsu, Sun Microsystems and Naim. It has designed all the hardware for TomTom, over 20 DAB radios, the Inventure backpack, and the Presso hand-pulled coffee expresso machine.

Next page: ’My brain was coming out of my ears. Literally’ — Nick Healey
Page:
Corrections Send us news

Invests in reborn PDA under the Gemini project