Review No, Apple didn't send us an iPhone. Newsweek got one. And The Wall Street Journal. And The New York Times. But Jobs and Co. have a very different attitude towards El Reg. We weren't likely to get an official review unit even before our very own Ashlee Vance publicly questioned the sanity of the company's PR staff. We had to wait in line like everyone else.

Friday afternoon, I turned up at the downtown San Francisco Apple store just past 4pm West Coast time – nearly two hours before the cell phone/handheld/status symbol went on sale - and the line stretched up one block, across another, and down a third. No fewer than 350 people were camped out on the sidewalk, including everyone from a twentysomething with a Mohican and a pinstriped suit to a 70-year-old with an "I'm a Mac" T-shirt. That's 350 camped out for a retail product. Apple's customers are in worse shape than its PR staff.

"Are you waiting for the cable car?" a woman stopped to ask.

It wasn't quite as ridiculous as I expected. An army of overly-hip Apple employees moved buyers in and out of the store so quickly, I had my 4GB iPhone within an hour of the doors opening. Well, the waiting wasn’t as ridiculous as I expected. Those black-shirted Apple automatons applauded me as I walked into the store – and applauded again as I walked out.

The iPhone itself? Once I got it home, I couldn’t help but enjoy the novelty of it all. The “Look Ma, no stylus!” interface. The visual voicemail. The display image that rotates as the device rotates. Fresh out of the box, the iPhone is so much fun because it’s such a departure from what’s come before. But even during this wide-eyed honeymoon period, frustrations set in from time to time, and you have to wonder how the device will fare in the long-term. 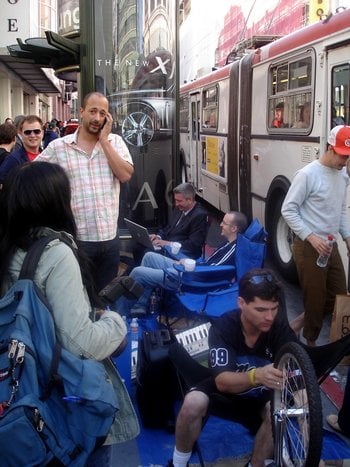 The front of the queue...

Next page: The Setup
Page: