Hubble's still got it

In a galaxy far, far away, a period of unusually intense star formation is underway. Thousands upon thousands of new stars are blazing into life, as a starburst rips through the galaxy NGC 4449. 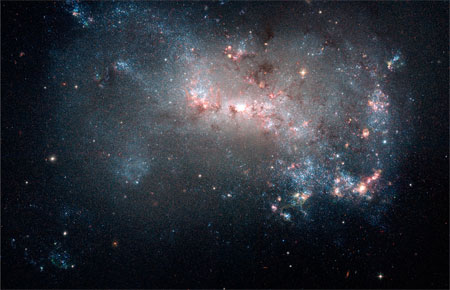 NGC 4449, part of a group of galaxies in the constellation Canes Venatici.

"NGC 4449 is not like the Milky Way - it is more like the Magellanic Cloud. It is an irregularly shaped, dwarf galaxy that has been distorted by some kind of interaction," said Lars Christensen, head of communications for the HST at ESA.

NGC 4449 belongs to a group of galaxies in the constellation Canes Venatici, the Hunting Dogs. Christensen explains that the most likely cause of the deformation is an encounter with a neighbouring galaxy, or galaxies.

"Galaxies are quite social beings - they don't live isolated lives. After all they are around for billions of years so there is plenty of time for them to interact."

These encounters are often quite violent. When two galaxies get close enough to each other, they fall under the influence of the other's gravitational field. This interaction can send a shockwave tearing through the dust and gas in between the stars, triggering a violent but beautiful period of star formation.

Normally a starburst would be confined to the galactic centre. But in the case of NGC 4449, the starburst runs the length and breadth of the galaxy. The very youngest stars are observed both in the nucleus, and in streams around the galaxy.

"It is a stunning image. I've been sitting here in the office using the zoom feature we have. You can see supernova remnants, dust lanes... it is really very beautiful," Christensen added.

Because of the global nature of the starburst, astronomers say the galaxy is an ideal "laboratory" for observing likely conditions of early galactic formation and evolution in the early days of the universe. ®

Work on a Gecko-based version of Firefox for iOS is underway, again
Devops7 Feb 2023 | 1

Best to revisit that plan to bring home a cheap OnePlus, Xiaomi, Oppo, or Realme handset from your holiday
Software7 Feb 2023 | 10