She was a 31 mage, he was a 17 warrior. Unfortunately, we're talking about their ages

An Australian woman is facing child abduction charges in the US after trying to bring her 17-year-old World of Warcraft boyfriend back to Oz.

Tamara Broome, a 31-year-old university student, was arrested on June 26 after she flew from Adelaide to the boy's home in Greenville, North Carolina to pick up her internet beau.

Broome allegedly had an online relationship with the boy for more than a year, which began in the online game World of Warcraft. The two had also exchanged copious amounts of email and even discussed marriage.

The Azerothian love-affair has sent Broome to Pitt County Detention Centre where she will get a July 11 court date. Police have seized her laptop computer and charged Broome with attempting to abduct a child. If convicted she will face more than two years in a US jail. Broome is currently being held on a $2.35m bond.

(WoW equipment could not be seized by authorities, as it is soulbound.) 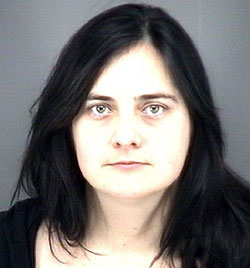 According to Australian news sources, Broome's relatives allege the teenager's parents set her up, even springing for the [air fare] to frame her.

But Pitt County Sheriff detectives call the allegations "ridiculous," claiming they will not discuss who fronted for the ticket "because that's part of the evidence, we can't get into that."

Authorities became involved when the parents reported the boy missing June 12. He was found later that day at Raleigh-Durham International Airport trying to catch a flight to Australia to see the woman. Investigators later discovered that Broome was coming to the US and apprehended her as she stepped of a train at Rocky Mount station in North Carolina.

Under North Carolina law, a minor is considered someone under the age of 18.

Besides, any WoW player could tell you in a 18/31 spread, the experience would be lousy anyway. ®