And a bunch of weirdo craters

Hyperion, one of Saturn's many moons, is covered in the raw material necessary for life to form, according to new data from NASA's Cassini space craft.

The probe identified water and carbon dioxide ices, as well as dark material that fits the spectral profile of hydrocarbons, NASA said.

Dale Cruikshank, a planetary scientist at NASA's Ames Research Centre and lead author of a paper appearing in today's edition of the journal Nature, explains the significance of the find: "These molecules, when embedded in ice and exposed to ultraviolet light, form new molecules of biological significance. This doesn't mean that we have found life, but it is a further indication that the basic chemistry needed for life is widespread in the universe." 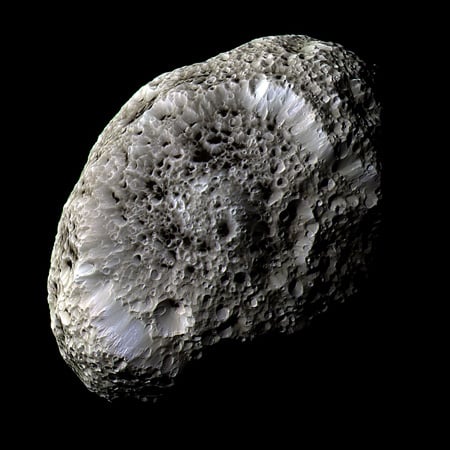 Hydrocarbons are found elsewhere in the solar system: notably on comets, meteorites, and space dust.

Cruikshank explains that the carbon dioxide they have seen on Hyperion is not pure, but likely to be chemically attached to other molecules. He says pure CO2 would have evaporated away long ago. The water ice, meanwhile, is crystalline, exactly as it is on Earth.

Hyperion has also baffled astronomers because of its strange, sponge-like appearance. But now, thanks to new calculations of the moon's density, researchers working with data beamed back by the Cassini probe think they have an explanation: craters simply form differently on Hyperion.

According to work published in today's edition of Nature, there are two processes at work. Firstly, the surface of the moon is so porous that any bodies impacting the moon form their craters by compacting the surface, rather than ejecting material as it would on a denser body.

Secondly, Hyperion's entire body is of such low density that its gravitational field is so weak that any ejecta is very unlikely to fall back to the surface. This keeps the edges of its craters sharply defined, contributing to its odd appearance.

In September 2005, Cassini made its closest fly-by of the space sponge. The space probe was deflected very slightly, which has allowed astronomers to make a good estimate of its mass. the team has been able to determine that the moon is only slightly more than half as dense as water.

"The close flyby produced a tiny but measurable deflection of Cassini's orbit," said Cassini radio science deputy team leader and JPL scientist Nicole Rappaport. "Combined with the determination of Hyperion's volume from imaging data, this provided an accurate computation of its density." ®