Checking for ghosts or aliens?

Brief Torchwood's Captain Jack has been sighted at CERN's Large Hadron Collider. Does this mean that when it is switched on it is likely to open a rift under Cardiff from whence all manner of spooky things shall spring? 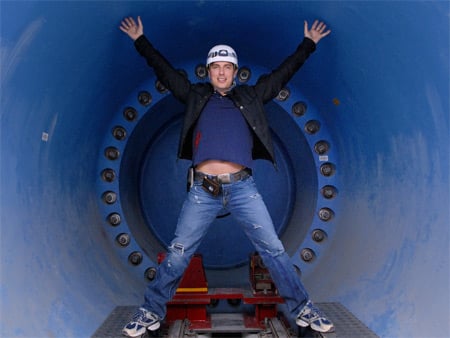 Or is it a shameless publicity stunt designed to raise the profile of the particle accelerator by tying it to a sci-fi TV star?

Does it even matter? They had us at Torchwood...

Actor John Barrowman was given a tour of the facility and has recorded his thoughts on a podcast for posterity. You can check it out on YouTube here.

According to the press release, Barrowman said: "It's nice to be able to see where all these questions that we have hopefully one day will be answered"

"And its nice to know that the scientists, the guys and girls who work here, still have questions too. No one knows the answer, that's the good thing… except Captain Jack!" ®