Comment Within hours of last week's iPhone debut, hackers were dissecting it. Their goal: unlock capabilities Apple preferred customers not have. As a result, it's now possible to activate the device without entering into a two-year contract, and it's only a matter of time until you can run third-party apps.

Alas, one of the iPhone's biggest shortcomings seems to have gone completely unnoticed by hackers, which means we're most likely stuck with it. That's a shame.

We're talking about the inability to manually manage music on an iPhone by connecting it to a computer, highlighting a band, album or song within iTunes and moving it to the iPhone icon. Apple, the company that practically invented the drag-and-drop, has consciously eliminated the feature from the iPhone. This decision effectively neuters the device because it removes capabilities that played a huge role in making the iPod the gee-whiz device that set the standard for portable music players.

If you want to load the new albums by Wilco or the White Stripes (both highly recommended, by the way), you'll have to create a playlist in iTunes first and then sync it with your iPhone. If you later decide you want to remove one of those albums from the device, you'll have to remove it from the iTunes playlist and sync again.

This is precisely the kind of tortured user interface that the overly smug Mac Guy lampoons in Apple's ubiquitous advertisements. It's awkward, creates extra steps, and makes it next to impossible to use more than one computer to load music onto the iPhone, since you need identical playlists on all the machines.

Even worse, this change means it's impossible to plug an iPhone into a computer and play its contents through iTunes. That's a pity. One of the unsung glories of an iPod is its ability to function as a highly portable jukebox at parties, nightclubs or other gatherings. Just connect it to your favorite PC or Mac, fire up iTunes (or better yet, Winamp if you're on a PC) and suddenly you have hundreds of new tunes to spice up that tired party shuffle that's been droning on for the past hour.

This feature is one of the iPod's few social skills, and is an important counterweight for a device that is otherwise remarkable for wrapping its users in their own solitary bubble.

The iPod pictured below has manual music management enabled. When it is connected to a computer, its songs appear in iTunes in black, meaning tunes can be clicked on and played. 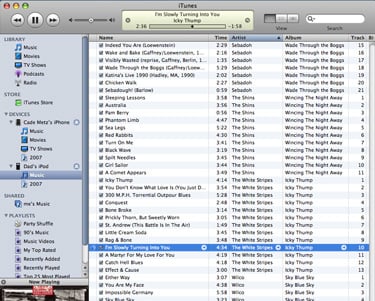 Locked and Loaded: The iPod makes it easy to load and play music on your computer

Compare that with the iPhone, pictured below. There is no way to enable manual management. As a result, entries in the music library are gray, designating there is no way for iTunes to play them. 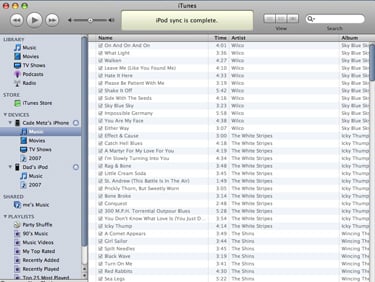 Locked down: Thanks, Apple

The iPod's ability to play music through a computer allows users to come together and play new tunes for friends in a way that is perfectly legal and highly contagious. Being able to play iPod contents through iTunes guarantees that transitions from one contributor to another are seamless, and it provides all the eye candy and other benefits that come from being connected to a fully functioning computer.

The elimination of manual management is all the more striking given that the iPhone has a recessed headphone jack. That means even those who opt to plug their device into a PA using the mini port (at best, an inferior method for sharing music at parties) won't be able to do so without a special adapter.

So far, Apple's propaganda chiefs, always wont to drink their own Kool-Aid, seem oblivious to this shortcoming, going so far as to proclaim the iPhone "the best iPod we've ever created" in an online tutorial. Apple designers are considering adding the functionality into the iPhone, according to rumors on online discussion boards, but don't hold your breath.

That means the tinkering of a band of determined hackers may be our best hope in turning around this sad state of affairs. Thanks a lot DRM-warrior, Steve. ®