ICANN: 'The rum made us do it'

Hack's Notebook The ICANN event ritual we most enjoy here at El Reg is the final press conference, in which leaders Paul Twomey and Vint Cerf field questions from assorted hacks about the week's events. With that press conference - and the ICANN San Juan meeting itself - now a week behind us, we thought the time was right to offer a final tip of the cap to the latest ICANN extravaganza.

To wit: ICANN is becoming a truly global organization, albeit one with occasionally uncomfortable ties to the US government - at least for those in the Internet Governance Forum (IGF). The internationalization of domain names (IDNs), as well as a general expansion of the generic top level domain (gTLD) space, offer the potential for a truly international internet, one neither constrained by the English language nor the limits of the Latin script itself. Although the issue has proved more challenging than it initially seemed - some characters in different scripts are overly similar - and the IDNs won't be here for probably another year, the light finally is at the end of the tunnel.

There is a more pressing technical issue at hand: the fact that the current internet protocol (IPv4) will run out of addresses, oh, say in four years or so. The next protocol, IPv6 - which will provide trillions upon trillions of internet addresses - is not yet ready for prime time, and there is no firm timetable for when it will be.

Then there are the social events. Your correspondent regrettably missed the salsa party due to deadline constraints [Yeah right - Ed], but those who went apparently had a grand time - which means that this correspondent is one that still hasn't learned to salsa. A hotel room, a laptop and a bottle of El Barrilito [We thought so - Ed] rounded out my night.

ICANN's half-hearted stabs at lunch were a disappointment.

Let's see...ICANN-approved nachos the first day...fried breaded Puerto Rican balls with thousand island dressing day two...well, I give up. To the pool bar at the Caribe Hilton it is, which made up for the lunches, and then some. 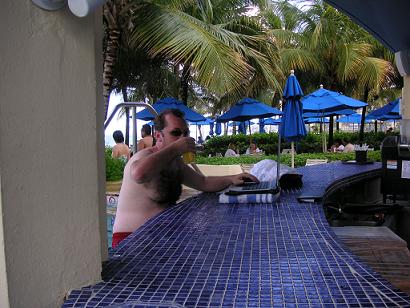 The final day's press conference always has a certain urgency to it, as everyone is looking to wrap up the week. Everyone is ready to roll up the carpets and head home. A certain slackening of protocol ensues. ICANN President and CEO Paul Twomey noted how much more productive and low-key the proceedings had been than those in Lisbon. Could it be the rum, he and Vint posited?

That was certainly part of it - someone even thought to include a small bottle of local favorite Don Q in the welcoming schwag bag. Buen provecho. ®