Stopping integration as an 'accident'

Look at any schematic diagram of the integration needed to ensure good communications between different collaborating applications and you instantly see the meaning behind the phrase "accidental architecture".

Add in the complexities inherent with the introduction of SOA environments, however, where a large number of applications can loosely integrate to many others on a temporary basis, and one can soon end up with an "accidental knitting pattern".

To some extent, part of this problem has been solved by the increasing use of the Enterprise Service Bus (ESB), but that only overcomes part of the integration problem – the interconnectivity. There is still the problem of what gets communicated. When there are different applications involved, each liable to be using a different data model, getting meaningful communications to occur between them can be a problem.

This was the target being addressed by Progress Software with its acquisition last year of Pantero and its Semantic Integrator Engine. It was another step along the road that Progress has been following lately, of buying technology that should build into a complete SOA technology stack.

One of the complementary acquisitions it made was that of Sonic and its ESB offering. Now these two halves of the integration problem are being brought closer together, as suggested last year by Bloor Research analyst Philip Howard.

According to Ken Rugg, vice president of data management products at Progress, the fundamental objective is to use DataXtend to create a common language between business systems. This is a potentially important tool in the SOA environment, where inter-applications communications are becoming both more complex and more fluid.

"Current integration is still only point-to-point," Rugg said. "So we are aiming to use DataXtend to build a more systematic, virtual, and distributed mediation layer. The aim is to create flexibility around the data models."

The latest version, and the first major release since the Progress acquisition, is V8.2 and the main addition is the inclusion of a Shared Information Data (SID) Model developed by the Telecommunications Managers Forum. This is a data model integration tool that is already widely used in the telecoms industry. Here, the practical advantages of integrating not only connectivity but relevant business information between different systems run by different service providers has been found to be far more pragmatically practical than being non-communicative for reasons of "competitive advantage". 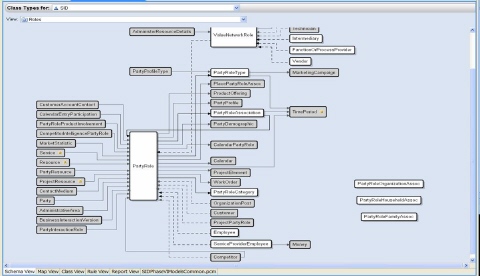 An example of the Shared Information Data Model used in DataXtend.

This is another example of the way the experiences of the telecoms industry in creating cross-platform, cross-application, and cross-business-boundary integration has started to leak out into the mainstream business systems arena. The SID provides the common data model through which data can be translated between disparate systems. It also provides a straight forward user interface to creating the connections between those disparate systems.

So the idea is to provide a centralised design and testing environment for data integration that can be deployed as stateless runtime code. This approach should allow systems to scale as required, and the runtime code runs on any ESB and in any Java container, which in effect means it should be available for use on most platforms. There are currently no plans in the DataXtend road map to add a .NET container.

The UI of the design tool allows a wide variety of data models to be imported, with flexibility being enhanced to include such models as web services. It runs on the Eclipse applications development environment.

As well as the telecoms industry, Rugg said DataXtend could be applied anywhere there is a general adherence to a standard industry-wide data model. So immediate targets for Progress are the finance and healthcare sectors.

He did, however, issue a call for industry bodies in other areas of business and commerce to start developing data models that can be applied to, and readily used by, the businesses operating in their areas of interest, so they can better exploit both inter-application communications and the potential of moving to SOA environments. ®