There's a Red Ring of Death joke in here somewhere

Microsoft Xbox division chief Peter Moore will be leaving his position in Redmond to join game developer Electronic Arts as president of the EA Sports label.

Moore's position as vice president of Microsoft's Entertainment and Devices division will be filled by Don Mattrick, a former president at Electronic Arts who more recently worked with Moore as an external adviser for Microsoft.

Moore begins his new job in Sept. and will report to EA CEO John Riccitiello.

Congratulations go out to Microsoft and EA for such a well-orchestrated "dance of the press release" to announce these moves almost simultaneously. The companies appeared to have statements in standby mode after rumors of Moore's departure began circulating around the net.

Before joining Microsoft in 2003, Moore was president and COO of Sega of America during the run of the ill-fated (but well-regarded) Dreamcast game system. He also served in a pivotal role as the company transitioned into a platform agnostic game developer. Before Sega, Moore was senior vice president of marketing at shoemaker, Reebok International.

"Peter Moore's proven record of leadership in games and sports makes him a terrific fit for heading up EA sports," Riccitiello in a statement. "As a partner at Microsoft and earlier, as a competitor, we've learned to respect his vision and leadership." 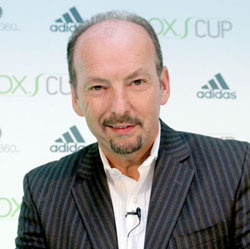 The combo game-sports experience is just the type of thing Cisco and Nabisco should consider.

Don Mattrick, was the founder of auto racing specialists Distinctive Software from 1982 until its merger with EA in 1991. Mattrick held various executive positions at EA before becoming president of Electronics Arts Worldwide and heir apparent to then-CEO Larry Probs. In 2005, Mattrick resigned from his position after concluding he "was not interested in running a public company."

Mattrick now joins an extremely public company which is currently shoulders-deep in a console war with Nintendo and Sony. Microsoft's console division was recently fronted with a $1bn bill to cover a warranty extension due to excessive failure rates in the Xbox 360. ®