A Scottish prosthetics company engaged in publicising its new bionic hand claims to have achieved significant advances in its field - and says servicemen injured in combat "love the more robotic look" of its technology.

Touch Bionics, based in Livingston, also seems set for a potentially lucrative lawsuit scuffle in future. If Apple's Steve Jobs ever gets interested in the medical industry he'll find that he needs to pay off Touch Bionics for the "iLimb" trademark. 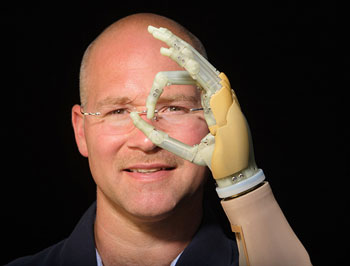 The iLimb. Other finger gestures apparently not yet available.

Meanwhile, Touch is already marketing its iLimb prosthetic hand. The device is operated in relatively conventional myo-electric fashion, by reading electrical muscle signals generated in the remaining limb of the user. Myo-electric limbs have been around for generations, but have typically been limited to relatively limited "c-clamp" functionality, often prone to control issues.

Touch quotes ex-US Army sergeant Juan Arredondo, who lost his hand to an insurgent bomb in 2004 and has recently tried out the iLimb. Apparently, his old myo-electric hand was prone to crushing cups or other fragile objects, but the iLimb boasts "built-in stall detection" which "tells each individual finger when it has sufficient grip on an object and, therefore, when to stop powering".

"Now I can pick up a Styrofoam cup without crushing it," said Arredondo.

"With my other myoelectric hand, I would really have to concentrate...the iLimb hand does things naturally. I can just grab the cup like a regular person."

The iLimb also boasts a range of different grips and configurations, and can rotate about the wrist axis. This allows a user to turn a key in a lock, pick up or manipulate objects between thumb and index or middle finger, or type (though only with the index finger). The extended index finger option is also useful for pointing, seemingly, and an "OK" sign is also achievable. There was no mention of any option to extend the middle finger alone or first two fingers simultaneously - which would seem an obvious necessity.

Touch also offers realistic skin coverings, making the iLimb appear much like a normal hand. They note, however, that this option isn't universally popular.

"Some patients, mainly military personnel, particularly love the robotic nature of the uncovered iLimb Hand and prefer not to wear it with a cosmesis glove," says the company.

This isn't recommended, however, for practical reasons: but Touch has done its best for those wishing to show off their cyborg chic: "Because of the need to provide a grip surface and to protect the hand from dust and water, Touch Bionics has developed the iLimb Skin. This is a thin layer of semi-transparent material."

Seems like Touch could do more for its military customers, though. What about a shooting grip configuration, for instance, designed for firing a gun? You'd need excellent trigger-finger control, and maybe a way to work the safety/selector switch with the iLimb's articulated thumb (on American M16-family weapons, anyway - Brits using the SA80 will always need to use their left hand to apply the safety catch or select full auto, bionic gunhand or not).

Or what about modular sockets for, erm, handy attachments?

Still, it seems that civilian amputees - as opposed to the proud military bionic men - prefer something a little less obtrusive. It could be a while until the cyborg look goes mainstream.

It could also be a while until wounded soldiers get this kit as of right. Touch says the iLimb is "two to three times more expensive than other more traditional myoelectric devices. Each iLimb Hand costs about US$18,000".

It would be nice to think the UK military, which is planning to hang more than $200,000-worth of equipment on each combat infantryman in future, could find this sort of cash for its injured veterans with ease. Past history doesn't bear that out, however. ®