Three employees of a pioneering spaceship company were killed and another three badly hurt when a propellant system blew up during testing in California yesterday.

The explosion happened at Mojave Air and Space Port at about 2:30pm local time. It is believed to have involved a tank of nitrous oxide, to be used as fuel in the forthcoming SpaceShip Two rocket-plane.

SpaceShip Two is being developed by Scaled Composites, the company famous for winning the Ansari X-Prize in 2004 with a record-breaking pair of flights by the re-usable manned suborbital craft SpaceShip One. 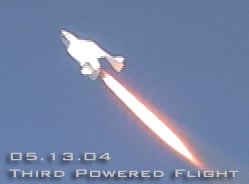 Private rocket-plane SpaceShip One in flight.

"We felt it was completely safe," said Rutan, apparently visibly upset. "We had done a lot of these [tests] with SpaceShip One."

Rutan said the test being carried out had not involved any ignition of fuel. It had been intended merely to investigate flow rates through certain equipment.

Asked why the explosion had happened, he replied: "We just don't know."

The new spacecraft, under development by Scaled Composites, will be much bigger than its predecessor and able to carry passengers as well as flight crew. The intention is to offer suborbital tourist trips in a collaborative venture with Richard Branson of the Virgin biz empire, under the name "Virgin Galactic".

SpaceShip Two has been shrouded in secrecy since its announcement last year, a condition which Rutan said would remain unchanged for the present. The new ship "won't be unveiled until it's ready to fly", he told assembled reporters. ®