Analysis Some products bewitch because of their style or inventiveness - such as the iPhone. But others earn their keep through sheer usefulness, and for a decade Nokia's Communicator has proved itself to be one of the latter. Until now, that is.

While it may be too early to call this Nokia's "New Coke" moment, MBA students may be studying the saga of the E90 Communicator phone in the years to come, as an example of how not to do product development and marketing. Even if the fate of this obscure range of mobile phones doesn't concern you, it should be an important wake-up call for Nokia, and hopefully the whole mobile phone industry.

By any scale, the sudden demise of the "brick" is a strange story. Although the Communicator is a niche category in terms of volumes sold, it's an important one for the company and one that Nokia has nurtured, protected through patents, and made a great investment in for what really is an eternity in the mobile phone business.

The first Communicator, the Nokia 9000, appeared in 1996. Despite its bulk, its awkward keyboard (even then, no match for the Psion PDAs of the day), and slow and expensive data connectivity, it won instant popularity with some important markets. Sales staff could send and receive faxes to make a proposal or clinch a deal, while the self-employed found it even more useful - it was an office computer in the pocket. 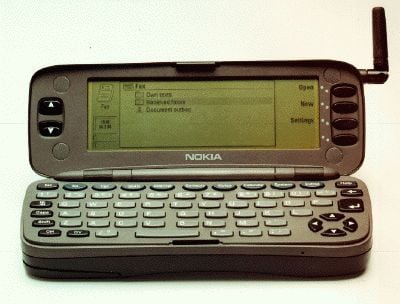 Since 2001, the line has been based on Symbian, which has delivered what it had always promised: great battery life and rock solid reliability. Ease of use became a strength of the product too - as Nokia used the acres of interface space to the full. And as text messaging became established, it found wider markets - it was rare to see a Nokia employee without one, for example, and a strong catalog of VPN, database and messaging ensured it was viable in important enterprise markets too. As a consequence, Communicator owners have great loyalty to the product - they can get an awful lot out of it.

Now the latest version, the E90, is finally available - but the backlash from the loyal Communicator community is something to behold.

"E90 is a dissapointment (sic)," writes one user. "Bought the long awaited E90 2 days ago and sold it off yesterday. In functionality it is a step or two down from a 9300i. I've gone back to the latter."

"I bought the E90 last week, and sold it after 4 days. How come Nokia calls this device a communicator, where it has the same platform as all other N-series phones? It's double the price of a N95 and has less features than the N95.

"Sorry for being so emotional but, NOKIA has really done a lousy job on bringing out the E90 as a Communicator."

Are these fickle gadget fans who burn through a device a week? Not so - in fact they love it! Over at My-Symbian, for example, we learn what missing features enthusiasts valued have now disappeared. It's not a short list.

For the E90, Nokia dumped the well-loved and sophisticated QWERTY user interface (Series 80) that had served it so well for a decade, and replaced it with S60, a user interface designed for use with one thumb! Missing are the neat "cue card" buttons which made complicated operations a doddle. Gone are the Ctrl and Shift keyboard accelerations, or multiple levels of zoom. In place of the Mac or Windows-like pull down menus, everything hangs off one menu - in some cases, more than 30 items. Standard Communicator featues such as fax and the ability to send timed SMS messages haven't been put back into S60 for the E90 - and the bundled office suite is a pale shadow of the Series 80 Communicator applications.

So Series 60, which performs the one-thumb role adequately enough, has simply been stretched too far, and potential customers have caught on to the ruse.

"Using Symbian S60 3rd for the "Communicator" was a huge mistake," explains one admirer of the hardware.

"The E90 has a great concept and it works pretty well with the latest FW version but for serious business stuff, this device is pretty much useless right now."

You get the idea.

It's rather like upgrading to the latest Porsche, only to find the leather upholstry has been replaced by the cheap plastic of an old Trabant. The manufacturer has added waterskis and a propeller - so you can claim it's the most "feature rich" Trabant in your street, but the pleasure as well as the practicality of the user experience is gone, leaving owners you feeling severely downgraded - as well as $1,000 worse off.

Debate rages on, split along user demographics. Gadget enthusiasts are positive, while the core market of business users regard it as a regression.

"I think the E90 is NOT a communicator but is a very smart smartphone (despite what it says on the box), and is disappointing in many small but incrementally large ways in the user interface," says one another.

"The E90 cannot be used as a good enough planning tool," laments another, while a French business journalist mourns the passing of the rich software suite inherited from Psion (see here and here.

Now, before we come to why this tale is really so interesting, we must first take a minor historical detour, which will explain the confusion and corporate in-fighting behind the E90, the "Cargo Cult Communicator".