Hence the bloggers' incomprehension at the loss of something as vital to users as the fax. While business users cry out for dependable technology, the blogging gadget enthusiasts lose interest very quickly - after all, there's always something new and shiny along next week. Reading through the defenses of the E90 on web discussion boards, they come from users who have multiple devices, and/or change their gadgets with great frequency. That's not really the enterprise or SME demographic Nokia needs.

(While neglecting the core IT market, Nokia does pamper the uncritical element of the blogs, packing them on their way with a freebie and the message, "Nokia is listening to you, keep writing, ranting and whatever it is you're currently doing".)

So "buzz marketing", which has become a lucrative business for expensive 2.0 consultants, actually plays to all of Nokia's weaknesses and downplays all its historical strengths. 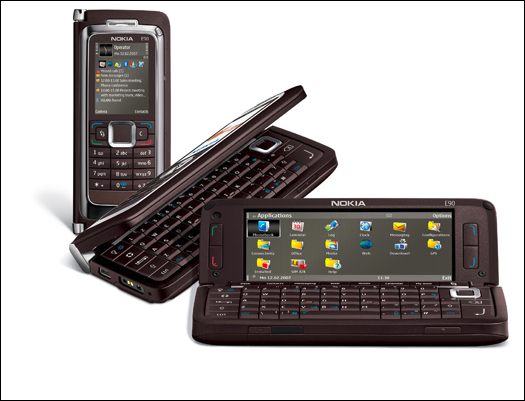 There may be an even less generous explanation than Nokia simply making the best of a bad job. And that it's only listening to what it wants to hear. The gadget bloggers tell Nokia they want more shiny gadgets, and Nokia obliges, downgrading important software investment. This generates a closed feedback loop - acknowledged to be one of the darker aspects of the internet. Views become reinforced and polarised, and a company can lose touch with the reality of what core users need.

Evidence to support this theory comes from the E90's dual screen functionality: the front "phone" is a full S60 one-handed smartphone. But this is a feature that no Communicator user ever expressed a desire to see on the boards: they wanted a faster front display, and T9 predictive text, but clearly didn't want the "main" internal display compromised to accomodate a richer "front" display.

However, the blogging sites have served one useful purpose for Nokia - to spread a piece of misinformation that justifies its lack of investment in the new Communicator software platform. Which is, that it was so technically complex to port Series 80 to the more modern version of Symbian, 9.1, that it wasn't economically justifiable. This is easily falsifiable.

Symbian is modular architecture, allowing licensees to radically alter the user interface layer - the EIKON and CONE libraries are independent of the application engines, the Symbian middleware and the kernel. So undertaking a new UI from scratch may be an expensive business - but porting one is not. So we made some enquires. Now remember that development costs can vary wildly depending on the organisation, and depends on how bureaucratic it is (think of government IT projects, for example). Engineers who have been able to compare their experiences working within the S60 team and at other companies invariably describe Nokia as the most bureaucratic place they've worked.

Nevertheless, after consulting Symbian experts, who know the source code well, we can conclude that the cost of porting Series 80 to the newer operating system was trivial - far less than amount Nokia spends on "buzz marketing", and probably less than its marketing program for bloggers. Nokia simply wanted to kill off Series 80 to save money, but crucially didn't want to spend money on replacing the missing features and developing the S60 user interface either.

Companies make these choices - and have to live with the consequences.

What now for Nokia software?

The E90 has arrived to the sound of flapping, as a lot of pigeons come home to roost.

Nokia's corporate in-fighting continues, although the idiotic divide between the consumer division, which Nokia calls "Multimedia" and Enterprise divisions was only resolved in the recent June re-organisation, which abolished both business units. This divide led to developers having to negotiate two citadels of corporate bureaucracy (and fill out two sets of forms) if they wanted to view the Symbian source code. It also led to idiocies such as Nokia crippling its business phones, the E-series, so phones such as the E61i and E65 don't sport a consumer-friendly feature such as Bluetooth stereo, found on its consumer N series. At the same time, Nokia for a while crippled its Mail For Exchange client so N-series owners couldn't install even this most basic enterprise client.

It's important to keep things in proportion. Nokia's hardware engineers can still deliver the goods - there are few complaints about missing hardware features in the E90, and Nokia's almost miraculously small E65i shows it has a clear competitive lead. Nokia's fate also depends much more on the growth area of the sub-$100 market, rather than on the quality of devices costing $1,000.

Nevertheless, the rocky user reception to the E90 couldn't have come at a worse time. Apple's iPhone user interface has drawn renewed attention to the user experience, and it doesn't reflect well on the high-end products from the Tier 1 manufacturers.

But Nokia is also facing its stiffest competition ever from Windows Mobile, and for the first time needs to dispense with its traditional arrogance and take this seriously. I've been using an E61i alongside a Motorola Q9, which runs Windows Mobile. Readers with long memories will know we've been merciless on the shortcomings of Microsoft's phone efforts over the years - and in all honesty, these products have been so bad we've been kind to even honour them with ridicule. Microsoft long ago gave up its ambitions to compete in the mass market consumer phone business.

However, the Q9 simply kicks the E61i out of sight. Almost everything is easier and much, much quicker on the Motorola. And it's smaller, thinner, and has a better keyboard.

Nokia needs to address the complacency which brought about the E90 debacle. It should start by taking the buzz out of "buzz marketing", reconnecting with its loyal business users, and remove the dead wood from its software business. ®