Updated Vodafone has withdrawn advertising from Facebook following the revelation its campaigns were running alongside the British National Party's official presence.

Two Facebook groups representing the crypto-racist organisation have clocked up 150 and 31 members respectively. By comparison, the non-aligned group "A Chief Export of Chuck Norris Is Pain" has 12,550 members. 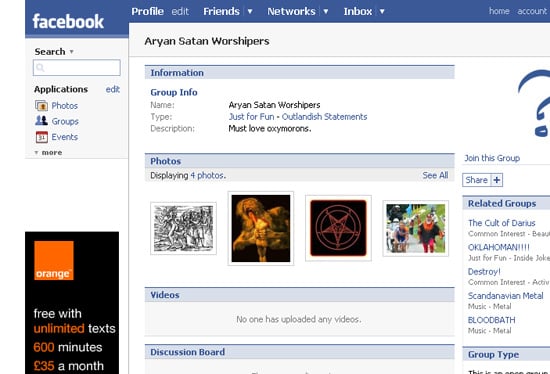 Vodafone said it will resume Facebook advertising once more robust controls over bookings are in place. As of writing, ads for Pipex and Prudential Healthcare are appearing on one of the groups.

The controversy demonstrates that despite the hype over targeting on the internet, advertisers have little control over what their brand is associated with.

The BNP bust was made by marketing mag New Media Age. After extensive investigations, The Register can reveal that Vodafone rival Orange's adverts are running on the group "Aryan Satan Worshipers" [sic]. Sick.®

10.45am Monday: Pipex rang to say they've pulled their ads too.