Quite what they wanted the bowler-hatted ones to do about the lights whizzing through the skies is unclear, but the full report makes for entertaining reading. 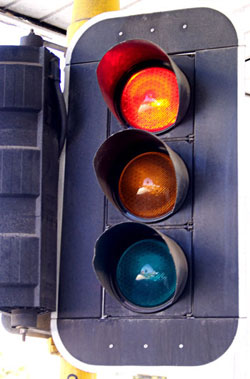 Highlights include "a big round swirly thing" in the skies above East Lothian, "a blue ball of light, with a tail at the end" and "the mothership and two smaller orbs...". Days later another chilling report: "The mothership was seen again."

There are clusters of sightings around 5 November (Guy Fawkes night, when we let off lots of fireworks for the non-Brit audience), and 31 December. One report on New Year's Eve read: "Lights - so many different ones."

Further amusement for the cynics comes from a sighting in Hastings where a two witnesses report seeing "an alien" outside their kitchen window. Hastings is clearly an odd place to visit.

The report also contains good news for Cumbrian drivers. One witness reported seeing: "a triangular object with lights. One green, one red, and the other two amber." We're going out on a limb here and identifying this one as a traffic light.

The MoD, however, remains unimpressed, saying it only investigates those sightings that could be related to military aircraft. Presumably, this means aliens visiting the UK for tourism are welcomed, and are not likely to be chased away by government officials.

A spokeswoman said: "Unless there's evidence of a potential threat we don't investigate to try to identify it."

The disclosures, not the first of their kind, were made in response to a Freedom of Information request. ®