Sounds generated deep in the fiery depths of the Sun make Earth, its atmosphere, and even its magnetic field ring like many cosmic bells. 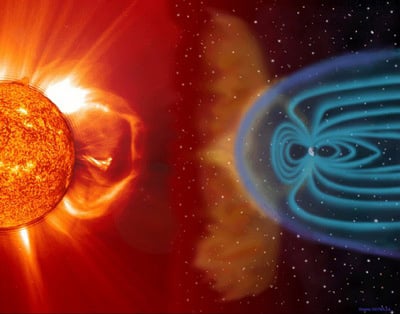 SOHO image of the Sun and an artist's impression of Earth's magnetosphere.

According to researchers on the Ulysses mission, there are distinct tones that are thought to be generated by energy and pressure waves in the Sun. Now, researchers have identified these same tones in the Earth's seismic data, and even in induced voltages in ocean cabling.

The vibrations in the Sun have two causes: pressure waves and gravity waves, which are referred to as p-mode and g-mode, respectively. Scientists hope to use the g-mode waves to study the interior of the Sun, in the same way that seismic data can provide an insight into the inner workings of Earth.

But although the p-mode solar oscillations have been observed by the SOHO observatory, g-mode vibrations are not optically detectable. But the evidence of the waves is there, and easily detectable, in data on Earth.

Lead researcher David Thomson says data from the Ulysses mission provides clues as to how the sounds reach Earth. He suggests the vibrations are picked up by the magnetic field at the Sun's surface. The solar wind then carries the field into interplanetary space, where space probes like Ulysses can pick up the signal.

The solar wind also interacts with the Earth's magnetic field, causing it to vibrate in sympathy. From our magnetic field, the signal is picked up by our many technological systems, as well as the planet itself.

The researchers add that the tones are far beyond the edge of human hearing, some 12 octaves below the lowest detectable note. While orchestras tune up to the A above middle C, at around 440 Hertz, the Earth rings at a much more stately 100-5000microHz. That is one vibration every 278 hours, or 11.5 days. ®