High resolution images sent back by ESA's SMART-1 lunar probe are helping scientists piece together the geological and volcanic history of the Moon. 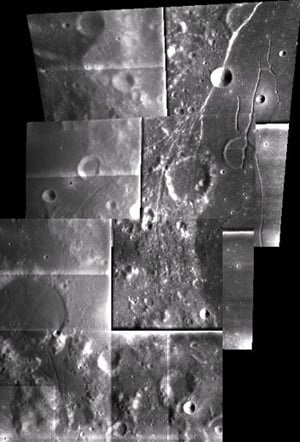 SMART-1 AMIE image mosaic of the edge of Mare Humorum.

The pictures, combined with data from the US's Clementine mission, have revealed small-scale geological features on the lunar surface that have gone undetected until now.

The data has uncovered a history of volcanic flooding of many of the mid-sized craters in and around the lunar basins.

In the Procellarum basin, meanwhile, the images have revealed wrinkle ridges that seem to have been casued by thermal and mechanical deformation, a result of volcanic activity.