Better than wind: power cuts will be predictable

The UK's first working tidal power project, which was supposed to begin construction this week, has suffered a delay.

However, the specialist barge needed to plant the turbine tower in the seabed is unavailable, and the project has been put on hold. 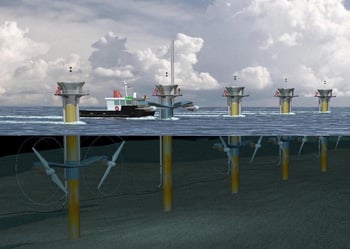 A SeaGen tide farm - one unit raised for maintenance.

SeaGen turbines are basically simple propellors, mounted in pairs on a heavy pile sunk into the seabed. The big props are driven by fast-flowing tides, generating potentially useful amounts of electricity. Underwater maintenance is expensive even in benign conditions and prohibitively difficult in fast tides, so the propellor assemblies are designed to be raised out of the water for maintenance or repairs.

MCT says the turbine blades spin slowly enough that they won't be a threat to sea life, and the company extols the zero-carbon, environmentally friendly nature of its power. The company, whose shareholders and partners include venture capitalists, offshore engineering concerns, and power companies, receives substantial government funding for its ongoing research programme, in line with the UK's aims of reducing carbon emissions.

The tidal power engineers reckon they need more than five knots of flow at peak spring tides and 20 to 30 metres depth to be viable. They say their plan for renewable juice is superior to others because the energy produced is "as predictable as the tides... unlike wind or wave energy which respond to the more random quirks of the weather system" - an argument which could apply equally to solar power in the UK, too.

Solar, wind and wave power are often criticised because they need standby generators - presumably hydrocarbon or nuclear fuelled - in place to cover inevitable power drops during calm and/or cloudy weather. Power in national-grid quantities is very hard to store meaningfully - it normally has to be generated as needed (unless you want to get into drawing juice from the millions of plug-in hybrids that might be parked at the time; though this will mean a lot of them burning petrol later that they otherwise wouldn't have, so you've still effectively used a hydrocarbon standby).

The tidal lads, though, are being a bit naughty here in suggesting that they wouldn't need standby generators like wind, sun etc. Even though their SeaGen submarine windmill works with the tide going both ways, it won't produce a steady, reliable flow of power. Every seaman knows the "rule of twelfths" which says that in the hour after high tide one-twelfth of the total water will flow back out; the next hour two-twelfths; then three; then three; then two; then the final twelfth, until low tide is reached approximately six hours later.

That's just a rule of thumb, but it's a fairly good one. Tidal turbines are going to vary from zero output at slack water to maximum when the flood and ebb are flowing at full speed; and the peak flow will vary between spring and neap tides too. The tidal turbine will operate on average at well under 50 per cent of what it must be built to take, and will dip to nothing four times every day.

In other words, it will need full standby from somewhere, just like wind, wave and solar; and it will have to be inefficiently overengineered, just like them and unlike hydrocarbon or nuclear plants, which hatefully run at 90 per cent of max cap or better year after year.

There's also a question of costs. MCT reckons the Strangford Lough SeaGen project will cost £8.5m and is rated for 1 megawatt - one would hope this is average rather than maximum output. Consumers pay about 10p per kilowatt-hour for their juice in the UK, but some of that reflects transmission losses and costs, not to mention profit margins.

Being generous and saying that a generation facility might get 5p of revenue per kilowatt hour at the point of grid connection, SeaGen might make an average of £50 per hour - if indeed the 1MW rating is average. If that figure is a maximum it might rake in £20/hour tops over time.

At the optimistic rate, assuming it costs absolutely nothing to run - obviously not true - it will have only just paid for itself when it wears out after its predicted life of 20 years.

Or, to put it another way, it makes no commercial sense at all, barring a massive electricity price hike or equivalent government subsidy (paid by taxpayers - so a targeted price hike on those whose tax bills are a large part of their income - you and me, that is).

Of course, SeaGen is a pilot project, and the figures can be expected to improve in future - but it's already had the benefit of an earlier pilot, the £3.4m, 300kW SeaFlow off North Devon.

"Of the 60-odd [tidal power] projects I've seen, this seems like the best," he said.

Elliott reckoned tidal and wave power could eventually provide between 15 per cent and 20 per cent of the UK's electricity needs.

Maybe so, but we'll need backup hydrocarbon or nuclear for pretty much all of that, and the increased electricity bill - or tax bill, or some bill - will be a big old pillow to bite. ®