Microsoft and Nokia team up for Windows Live

Nokia, in conjunction with Microsoft, has released a version of Windows Live for its Series 60 handsets, with Series 40 to follow next year.

The deal gives punters easy access to Windows Messenger, Hotmail, Contacts and Spaces, without so much as a nod to the network operators. 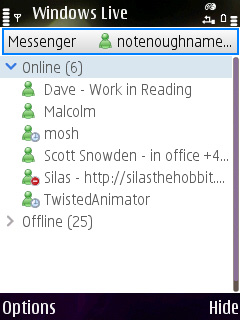 Your friends on your mobile

The application may already be installed using the "Download" application on the N73, N76, N80, N93i and N95, where a new icon - WinLive - offers "Mail and IM" and "WL Spaces" for installation. The installing process takes a while, and consists of several components, but once installed offers well-integrated access to Windows Messenger.

Only IM is available - no video, VoIP, or such. File transfer appears to work, but we weren't able to find any of the received files when we tried it.

WL Spaces adds Windows Live Spaces to the available media-upload sites, along with Flickr and Vox which come pre-installed.

Much of this functionality was already available for Series 60 handsets, though not for free and not endorsed by Microsoft, but pre-installing the applications onto Series 40 phones (the platform used by mid-range phones such as the Nokia 6230) increases the potential user-base enormously.

The launch is a clear snub to network operators who have made several half-hearted attempts to launch their own email and even photo-sharing applications. By doing a deal directly with Microsoft, the network operator is reduced to trying to collect on the data traffic generated.

Right now the service is free, though the terms and conditions make it clear that a monthly subscription may be imposed later (with a 30-day warning). Such a subscription will be paid to Microsoft or Nokia, not the network operator. Why settle for 10 per cent of revenues when you can deal direct? ®