No low-cal versions in the pipeline though...

Sony's battery boffins seem to have learnt some lessons from the previous few month's, ahem, problems. They've developed a battery that generates power from sugar and, they claim, can create enough power to run an MP3 player.

The so-called "bio battery" generates electricity by mixing enzymes with a sugar solution. They break the sugar down into useable power, much like the process of converting food into energy in the human body. 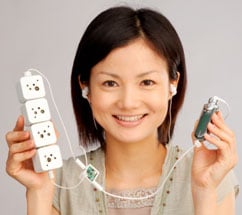 Sony said that initial tests have shown the battery can create up to 50mW of power, which it said is currently the world's highest level of power generated by a passive-type bio battery. However, it kept quiet on how long the battery can power a device.

How does it work? The enzyme's action on the sugar - glucose, to be precise - pumps Hydrogen ions and electrons into the solution. The ions pass through a membrane - establishing the potential difference that drives the connected device - where they combine with oxygen from the air and electrons through the circuit to form water as a by-product.

Pictures show the battery arranged into interlocking cubes, each measuring 3.9 x 3.9 x 3.9cm, though it's still unclear how the batteries connect together and whether they are designed as reusable and interchangeable power packs.

Sony also claimed the battery is ecologically friendly and regenerative, because sugar is a naturally occurring substance.

However, the company couldn't say when the device might come to market. As you can see from the size, it's not going to replace rechargeables or double-As any time soon.

Sony's latest development is a world away from the so-called paper battery that hit the headlines earlier this month. It contains carbon nanotubes, which each act as an electrode, and are then embedded in a sheet of paper that's soaked in ionic liquid electrolytes, which then conduct the electricity.