Dell is adding more power to its high-end line of mobile workstations with the debut of the Precision M6300, a 17" notebook geared at engineers, developers, video editors and others who need to tote around some serious silicon.

Celebrating its 10th anniversary in workstation marketplace, Dell is aiming for the system as not so much a complement to a PC, but a complete desktop replacement.

The new model makes use of Intel's latest 64-bit Core Due Extreme Edition X7900 processor. The chips clock in at 2.8GHz, has up to 4MB L2 Cache, and 800MHz Front Side Bus. Dell says it's first to market with the processor and will hold it as an exclusive for a while. 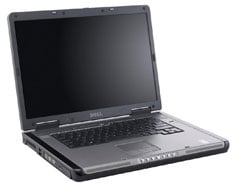 Storage options include a 120GB or 200GB hard drive. Dell is also offering a SanDisk 32GB solid-state disk for those expecting to toss it around a bit.

Not that the machine has a glass jaw without it. The M6300 is housed in a magnesium alloy chassis, which aids in the rigidity and durability of the display, but also lowers the system's weight to 8.5 pounds compared to the 9 pounds of the older M90. It's not exactly light, but Dell expects to see customers take it with them every where they go to work.

The battery will last up to four hours, and all of the system's components and configurations are Energy Star 4.0 compliant.

Optical drives include an 8x DVD, 24x CD-RW, 8x DVD+/-RW. If that isn't enough, customers can opt for a Blu-ray drive at 2x write speed. The machine ships with a Trusted Platform Module security chip ready to work with the integrated smart-card reader — which comes standard — and an optional fingerprint scanner. They also include 802.11a/g/n/ Wi-Fi. Bluetooth 2.0+EDR and Dell Wireless 5510 HSDPA cards are optional.

The M6300 ships with various configurations of Windows; XP, Vista Business and Vista Ultimate in 32-bit and 64-bit incarnations. RedHat Linux 5.1 will be available on the system in October.