A Touch too much

Our analysis of the prospects and possibilities for the new iPod Touch got readers very excited. Not a single reader used the words "locked-down, overpriced PDA", which would have been a natural retort. But not one person could get excited about YouTube, either.

And you also sent in some excellent suggestions for trouserware too. The best of your thoughts tomorrow.

Now recall that some enthusiasts noticed that early versions of publicity material for Touch featured Bluetooth, which didn't make it into the finished product. Is it losing yet more?

One eagle eyed reader worries it might be. Apple has amended the publicity material from this (still visible in the Google cache) - 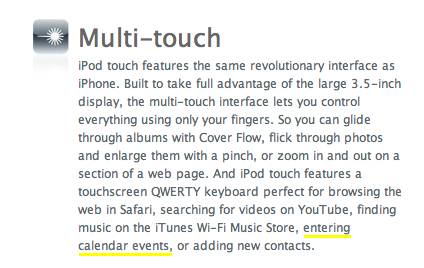 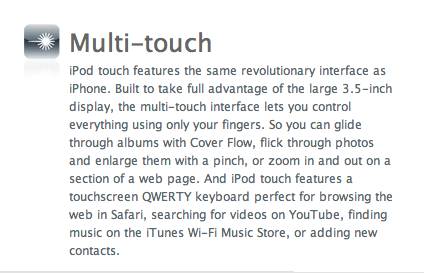 Of course, you say: this is just marketing blurb. And it's making a very long and cumbersome sentence shorter.

Then again, it might just be a pitch to hurry up and buy your iPod Touch. Buy now! Before we take out something else useful...

Apple has tweaked its post-launch marketing material before. Five years ago, Apple amended its guff for the PowerMac, which it was refreshing at the height of the 2002 Silly Season, after initially making this very exciting scientific breakthrough:

Faster than light? Not for long

We noticed, and readers piled in.

In the end, the Reality Distortion Field hadn't punctured a hole in the space time continuum, and the metaphor was removed.

Thanks to Julian for the tip®