New images from the Japanese infrared space telescope AKARI have revealed giant star-forming regions on the edge of the spiral galaxy M101. The findings suggest M101 is something of a special case, since star formation more usually happens in the denser central part of spiral galaxies. 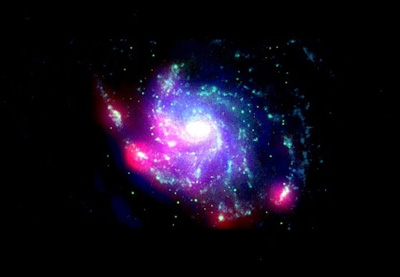 The galaxy is roughly twice the size of our own Milky Way, and located roughly 27 million light years away in the Great Bear constellation.

The team made cross-spectrum observations with AKARI's Far-Infrared Surveyor (FIS), plotting the temperature of the galaxy's dust. Dust in galaxies is heated by nearby stars, and tends to be warmer in star-forming regions where there are more hot, young stars. Regions populated by older, sun-like stars tend to be relatively cool.

In the image above, the cold dust is shown in blue, while the hotter dust is red. (Cunning, we're sure you'll agree).

But unusually as the distribution of star formation is in M101, there is an explanation.

Dr Stephen Serjeant from The Open University explains: "M101 had a near collision with a neighbour, and it could be that it yanked material out of its neighbour which is now raining down on one side of galaxy and triggering this star formation. It is unusual to find so much star formation at the edges of a galaxy - we normally expect this at the centres."

M101 is known to have had a so-called "tidal" interaction with a companion galaxy, and observations show that gas is indeed falling onto the outer edge of the galaxy. The scientists say that how and why this is happening is not fully understood, but that future observations of other galaxies in the region should help fill in the details.

Hoping for Microsoft's mythical Andromeda in your Xmas stocking? Don't hold your breath

This whole business is starting to look like a cargo cult

Astro-boffinry world rocked to its very core: Shock as Andromeda found to be not much bigger than Milky Way

Everything we knew was a lie

Infections spread across over 200 regions

Lighthouse in space spotted in years of records

Yes, more energetic than a pedantic Trekkie correcting you