When is a thin client computer too thin?

According to Wyse, never.

In fact, the company envisions a future where thin clients get thinner and thinner to a point where they are free and disposable. Madness, you say? Well, they certainly seem to be headed that way.

But let's step back a moment. For those unfamiliar with the term "thin client," it's a device that doesn't store applications or configuration settings inside it. Sounds like a lot of things, yes? But what separates this device from — say, a brick or a shoe — is that it can use a server for processing activities, making the thin client primarily an agent of sending and retrieving information between the user and the remote server . It follows that such a device uses less circuitry, and thus costs less and uses a lot less power than a PC. 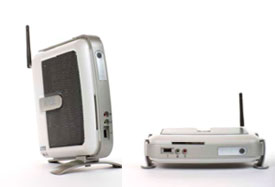 The new Wyse V class LE Thin Client is a device for virtual desktop environments using VMware VDI, Citrix or Microsoft. The client is Wyse's speediest offering, powered by a VIA Eden C7 processor running at 1.2GHz. It uses only 13 watts of power, has no fan, and is therefore silent. The ports include dual video output, audio, USB2, PS/2, Serial, and parallel. There's also an option of adding PCMCIA, Smart Card and WiFi. Customers can choose a zero client configuration for use with Wyse provisioning software, or with a minimum of 128MB Flash or DDR2 RAM to support Windows CE, Windows XP embedded or Linux.

The device will be available in September at $480 (without a monitor).

As a portable alternative, Wyse is releasing the X90e and X90 Thin Notebooks. The laptop has no local HDD, which eliminates the safety concern if it is lost, broken or stolen. Both models match the desktop device CPU speed with a VIA c7-M ULV running at 1.2GHz, and weighs in at only 3.8 pounds. The screen is a 12.1" LCD with `1280 x 800 resolution. Wyse said the battery life clocks between 5-7 hours.

Wyse claims the laptop will function anywhere an internet connection is available with the exception of an airplane. The company said they will solve that problem with an upcoming announcement, but won't say any more.

The X90 includes WiFi, video, internal and external audio, USB2 and Express slots. Upgrading to the X90e adds Smart Card and Bluetooth 2.0. The devices are zero client compatible, but have Windows XP embedded for disconnected use.

The software is available now, at $25 per client. ®